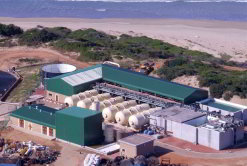 The Mossel Bay desalination plant will
ensure a constant supply of fresh water
even in times of drought.
(Image: Mossel Bay Municipality)

South Africa’s biggest seawater desalination plant has opened in the seaside town of Mossel Bay in the Western Cape province. This facility will ensure that the economic hub achieves greater water security and economic growth going into the future.

The 5-million megalitres are used entirely by the synthetic petroleum plant of PetroSA, the town’s biggest employer and biggest user of water. PetroSA consumes almost as much water daily as the municipality itself.

“The development of a desalination plant was always envisaged for the near future but after the town was faced with a severe drought, the project was escalated,” confirms Harry Hill, spokesperson for the municipality.

The drought, which was the worst in 130 years, reached such critical proportions at one point that the Eden District area in the south of the province was declared a disaster area. In the Eastern Cape the Nelson Mandela Bay Municipality had to impose water restrictions for almost three years as a result.

The enforced water restrictions in Mossel Bay meant that the water usage for the entire municipality was about 14-million megalitres a day.

“So the desalination plant has the capacity to meet the town’s entire water needs should this again be necessary,” adds Hill.

The project was jointly funded by the National Treasury and PetroSA who contributed R92-million (US$11-million) and R80-million ($9.6-million) respectively to the total project cost of R210 million ($25-million).

Apart from the seawater desalination plant, the municipality also sank several boreholes and built a plant to reclaim waste water for industrial purposes.

“While the new water sources, such as the seawater desalination plant, now seem to be superfluous, it must be remembered that Mossel Bay periodically suffers severe droughts,” says municipal manager Michele Gratz.

“The town’s population has also nearly doubled in the last two decades and it is almost certain that there will again be times that the municipality will have to rely on these others sources instead of the dams,”.

South Africa’s Department of Water Affairs foresees that by 2030 up to 10 % of the country’s urban water supply could come from water desalination plants. The National Water Resource Strategy (NWRS) is the blueprint on which the government bases its future water management approach.

The most recent version of the NWRS was drafted in 2004 and paints an alarming picture of water availability in years ahead, with a worst-case scenario showing a national deficit of 2 044-million cubic metres of water a year by 2025.

At the moment South Africa only has a few desalination plants – the plant in nearby Knysna is the second biggest, but pumps a mere 1.5 megalitres a day. There are also plants at Bitou Municipality, Sedgefield on the Garden Route and Boknes in the Eastern Cape.

“Seawater desalination technology is widely used across the world and it makes good common sense for a water-scarce country like South Africa to begin to do the same,” Hill adds.

The process of desalination is increasingly being used as a way to provide fresh water for human use in regions such as the Middle East, the Mediterranean and Australia, where potable water from other sources is limited.

The most widely used method follows the process of reverse osmosis. Seawater is pumped into a plant where semi-permeable membranes and pressure are used to separate dissolved matter and salts from the water.

The fresh water is then pumped to a storage facility for use while the brine, the highly concentrated seawater which resulted from the process, is pumped back into the sea or an estuary.

Despite all its benefits, desalination doesn’t offer a “silver bullet” solution to the world’s growing water problems. Besides using very expensive equipment, the process also uses a considerable amount of electricity and is not without environmental consequences.

Both the intake and discharge processes of the water may have affect on water quality and marine life. Aquatic species have a tolerance for natural salinity, an aspect which may be affected by the highly concentrated seawater which is pumped back into the ocean.

And while the intake structure is designed to maintain a flow of less than 0.15 metres per second – the minimum escape velocity for aquatic species – there is still a risk that plants, fish eggs and fish larvae around the intake areas may die.

The process also uses chemicals which if left untreated, can be harmful to the environment.

The most widely held belief is that desalination should be used in conjunction with other water-saving mechanisms such as waste water reclamation. This treated water is especially suitable for industrial use.

The Municipal Green Drop Certification Programme was introduced in 2008 as an incentive-based regulation of waste water quality and waste water management systems in South Africa.

A total of 821 waste water systems were assessed by the Department of Water Affairs in 2011, with only 40 systems achieving the coveted Green Drop status.