Managing a tough balancing act, Finance Minister Pravin Gordhan delivered the mini budget on 26 October 2016. He addressed issues facing the economy, politics and the global outlook. Through it all, he emphasised that there was hope and that, working together, goals could be achieved. 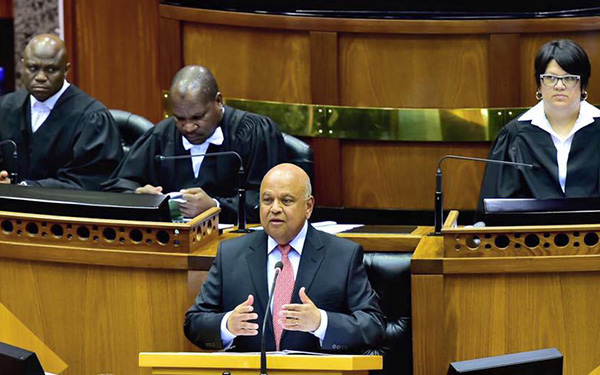 The minister delivered an overall message of hope, stressing that goals could be achieved through a collective effort. Gordhan balanced that message by acknowledging the realities of global and local politics and economics.

The first MTBPS was tabled in December 1997 under the leadership of President Mandela. Its purpose was stated as follows: “It describes Government’s goals and objectives.

“It explains the economic environment within which those objectives are being addressed, and projects the total level of resources that will be available.

“It analyses the trade-offs and choices that the nation confronts in addressing its reconstruction and development priorities.

“In keeping with our commitment to open, transparent and cooperative policy-making, it invites the nation to share with Government the important choices that must be made.”

Our goals remain to promote social transformation and more inclusive economic growth, and to achieve a much better life and opportunities for all South Africans.

On achieving a collective goal:

Above all, it invites Parliament and the people of South Africa to engage with the policy choices and decisions we must take in pursuing the aspirations and goals of our Constitution and the National Development Plan.

The economic environment this year is unusually difficult. We have also faced other extraordinary challenges.

Slow economic growth means that employment has declined over the past year. Many businesses are in difficulties and households are struggling to make ends meet.

Yet if each of us contributes to our shared goals, we can achieve greatness beyond our imaginings. There is a Pedi saying: Ditau tsa hloka seboka di shitwa ke nare ehlotsa, “lions that fail to work as a team will struggle to bring down even a limping buffalo”.

Members of the House, there are many other programmes and policies which are vital for our growth. With careful attention to sustainability and inclusivity, they will contribute to employment and broadening of economic opportunities. Properly designed and implemented, they will contribute to black economic empowerment and to strengthening localisation and the growth of South African enterprises.

Violent protests signal unresolved social challenges. They present immense challenges to the leadership of our higher education institutions, municipalities and community organisations. Highly stressful demands are made on our police and security personnel. Destruction of property diminishes the inheritance of our children.

Taking into account the rise in food prices this year, I am pleased to confirm that an additional increase of R10 a month has been made to social grants with effect from October.

On recognition of debt management:

In the international capital markets, we continue to succeed in raising debt despite the tough prevailing environment. South Africa was recently recognised as the “best sovereign debt management operations and issuer” in Sub Saharan Africa by the Global Markets Publication. Debt management initiatives over the past year have reduced government’s refinancing risks and were supported by investors across all the major financial centres in Asia, Europe and the United States. The World Bank has recently commended our debt management framework, indicating that South Africa is now “better positioned to absorb fiscal shocks going forward.”

We are resilient, and we have sound foundations on which to build. But it is action, to bring clarity where uncertainties remain, to address organisational weaknesses, to bring closure to infrastructure transactions and to accelerate trade and investment – that brings hope. It’s up to us.

The MTBPS revises our growth expectation for the South African economy to 0.5% for the 2016 calendar year, somewhat lower than the February estimates of 0.9%. For the current fiscal year, the revised growth estimate is 1.0%.

On increasing funds towards higher education:

Minister Nzimande has rightly emphasised that expanded opportunities in our universities cannot rely on government funding alone. Public expenditure on post-school education and training has in fact grown considerably faster than other budget allocations in recent years, and this will continue. At the heart of the issue is that access has expanded faster than resources. As a result, many students face financial hardships that undermine their ability to succeed academically.

In addition to the R16-billion added to higher education funding in the February budget, we therefore propose:

A further R9-billion for the National Student Financial Aid Scheme over the period ahead, raising its funding by over 18% a year.

Over R8-billion to meet the costs of fee increases for students from households with incomes up to R600 000.

In keeping with our commitment to transparency in the public finances, the National Treasury has launched a new local government budget data portal today, called “Municipal Money”. It provides citizens and other stakeholders with access to comparable, verified information on the financial performance of each municipality. It aims to promote transparency and citizen engagement by providing information about municipal spending in a simple, accessible format.

As Kofi Annan wrote in the foreword to the 2003 United National Convention Against Corruption:

In promoting development and making the world a better place for all, we are called upon to reaffirm the importance of core values such as honesty, respect for the rule of law, accountability and transparency.

On the National Development Plan:

The National Development Plan requires more rapid growth, and clearly this is a pre-condition for achieving inclusive development and transformation. The MTBPS emphasises that low growth is not inevitable – if we take the right decisions, inclusive and more rapid progress can be achieved.

On integrity and accountability:

Those who are called upon to serve in public institutions have an added responsibility to work with integrity, honesty and accountability and to ensure that their efforts are directed towards the shared interests of all South Africans.

Put simply, this means that public funds must not be diverted to private ends. All citizens are entitled to demand accountability and integrity from those who serve them.

…We dare not linger, for our long walk is not ended.