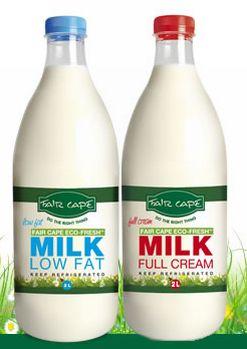 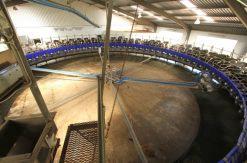 In the milking parlour, the cows are milked
on a large automated turntable and great
care is taken to ensure that every cow
is in top condition.
(Image: Fair Cape) 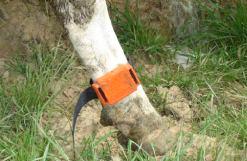 The average activity of a cow is measured
by an orange tag which is attached to
its back right leg.
(Image: Fair Cape)

Fair Cape Dairies is leading the way in greening the local milk industry by being the first South African dairy to publish its carbon footprint on its milk bottles.

Fair Cape’s new Eco-Fresh brand is different from any other milk on the market.

It is the only milk product which differentiates itself by accounting not only for the welfare of cows, but also the environment.

The Eco-Fresh milk label has three panels, which display detailed information on all the activities which have resulted in Fair Cape having reduced its footprint.

The company’s free range milk range focused only on the comfort of cows, whereas the new Eco-Fresh brand takes a more holistic view of sustainable milk production.

Sustainability of its dairy operations is a top priority at Fair Cape. Its new label has been carefully designed to inform consumers of its integrated approach to carbon management.

The left panel contains nutritional information and ingredients, in the required format that complies with updated labelling legislation.

It also displays a thermometer which informs the consumer of Fair Cape’s emissions per litre of milk produced from production to the retailer’s gate.

This section also shows all the actions that Fair Cape has taken to reduce its carbon footprint. The label leaves room to add future initiatives which will decrease its footprint even further.

One of the biggest challenges for many dairy farms is ground water pollution caused by cow effluent.

To combat this, Fair Cape has introduced a waste separation system. Water for cleaning the milking parlour is pumped from a dam into a big tank in the parlour.

Before cows are milked, water from the tank is pumped over the floor where the cows stand.

The water containing all the effluent is flushed through a separator which separates solids and liquids, and then pumps the water back into the dam, which is aerated to keep it hygienic.

The solid waste isn’t discarded, but sprayed onto the land as fertiliser.

This is where Fair Cape’s solid waste separation system is making a big difference.

Since 2008, the company has managed to reduce the use of chemical fertilisers by more than 20%, all thanks to using natural fertilisers such as cow dung.

Animal welfare has always been an important facet of Fair Cape’s operations, particularly the wellbeing of its cows.

Cows live in spacious, technologically-advanced sheds that have both an under-cover and open air section.

The sheds are designed to channel the hot air up and out of the building through gaps in the roof, which also allow cool air to enter.

In the milking parlour, the cows are milked on a large automated turntable and great care is taken to ensure that every cow is in top condition.

The average activity of a cow is measured by an orange tag which is attached to its back right leg.

This is important as a decline in activity could indicate that the cow is sick. By measuring the animal’s steps, the computer is able to flag a cow for attention if there is a noticeable deviation.

The tag measures the number of steps each cow takes and feeds that information to the computer each time the cow steps onto the milking turntable.

A computer is also attached to the suction cups to measure the volume of milk each cow produces.

Milk production is an indicator of health and if a cow’s milk yield decreases, it shows that the cow is not well.

When cows step off the table after milking, they walk past a scanner that recognises specific cows flagged for attention.

These cows are kept an enclosed space where a vet will carry out an inspection.

“This daily medical care is a critical element to ensuring that our cows are happy and healthy,” she explains.

In another first for Fair Cape and South Africa, the dairy launched its “Cow comfort index” in March last year.

Loubser says that the index monitors each cow’s wellbeing, based on ten measurements of comfort. The index is published monthly on Fair Cape’s Facebook page.

“It is the first time anyone in the South African market has taken a serious look at how one can produce great quality milk while looking after the environment and animals at the same time,” she says.

Each year, Fair Cape has its carbon footprint measured by the Global Carbon Exchange to see where it can improve its operations and achieve an even better footprint.

The carbon footprint for a litre of full cream milk is higher than low fat and fat free milk because of the extra cream content.

“As a company, we have taken an integrated approach to carbon management and we are striving for a greener and more environmentally-friendly approach to milk production,” says Loubser.