The R2-billion investment will create
as many as 2 000 jobs in East London.
(Image:  Mercedes-Benz) 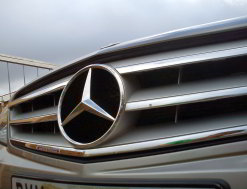 The MBSA East London plant is expected
to install the latest technology to produce
the C-Class in 2014.
(Image: Shamin Chibba)

This Christmas, it is not the Star of Bethlehem that will shine brightest but the three-armed star of the Mercedes-Benz logo that would guide South Africans to prosperity.

Parent company Daimler AG confirmed on 7 December that it will invest R2-billion (US$290.4-million) into the Mercedes-Benz South Africa (MBSA) plant in East London for production of the next-generation C-Class series.

The plant will be one of four manufacturing locations in the world producing the popular model. The other three production facilities are based in Germany, China and the US.

According to MBSA spokesperson Annelise van der Laan, the investment will create more jobs. “We expect about 1 500 to 2 000 new job opportunities, mainly at the supplier level,” she said.

“The investment is for preparation and installation of new equipment, the latest manufacturing technology, training and skills development. Further investment at supplier level is expected,” said Van der Laan.

MBSA are said to be exporting the cars to markets in Africa and the Asia-Pacific region.

Daimler AG board of management member Wolfgang Bernhard said MBSA East London was chosen for its superior production quality and its recognition as one of the best plants in the industry.

“MBSA has managed to provide us with a business and production plan that is competitive globally. Hence, our decision to build the next-generation of our C-Class at the East London plant is a logical step.”

Hansgeorg Niefer, MBSA’s CEO, expressed his delight that the facility was selected to continue building this particular range, which it has done since the mid-1990s.

“Just recently we exported the 100 000th C-Class built in East London. In the first quarter of next year we should reach the half-million mark of C-Class vehicles produced locally since 1994, the model’s start of production in South Africa.”

Niefer said more than a dozen new technologies would be brought to South Africa for the car and production processes.

“MBSA will localise more than 40% of the components for this new vehicle. We expect to see more investors and new suppliers, all with the latest technologies, coming to the country.”

Niefer added that, depending on market demand, the plant has the capacity to add a third shift which would allow it to run 24 hours per working day.

He emphasised that the investment into the East London plant is one of many made in the last 10 years – a total of over R5-billion ($726-million).

Van der Laan was mum on the details regarding the range’s design and features. “As the model is only due for release in 2014, details on design, styling, special features, new technology and pricing will not be made available due to the competitive nature of the auto industry,” she said.

The R2-billion investment would create as much as 2 000 jobs in East London.