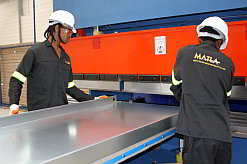 The solar water heating manufacturing
facility at the East London IDZ will create
more than 100 jobs. 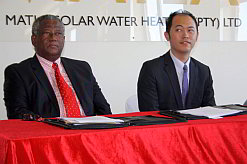 Matla’s GM Andy Bin-chi Lu, right, believes
the solar water heaters will save both
electricity and money. Beside him is the
company’s chairman, Zwelakhe Sisulu.
(Images: Shamin Chibba)

Carbon footprint, renewable energy resources, the green economy, and environmental sustainability; these are some of the buzzwords companies around the world use when they talk of their contribution to a greener world.

South Africa’s Matla Thermal Holdings has joined their ranks and is proving that its actions transcend those words.

The company officially announced that it would open the first fully integrated mass production manufacturing plant for both domestic and industrial solar water heaters in South Africa. The plant, worth R40-million (US$5.8-million), will be situated at the East London Industrial Development Zone (IDZ).

Matla is partnering with a Taiwanese consortium headed by Funland Industrial Company. The two groups signed the agreement at the IDZ on 25 November.

The facility is a response to the South African government’s call for alternative energy solutions to reduce electricity consumption.

Bryan Cheng, the manufacturing manager of Matla, said the company was still developing its base here.

“Our employees are going to Taiwan for training. We are still shipping the tools to South Africa. Once all this is done, production can begin.”

According to Matla’s GM Andy Bin-chi Lu, the two main objectives for the production of solar heaters are to save power and protect the environment. He said if 30 000 units are installed in a year, it could translate to a maximum reduction of 75MW of peak electricity demand.

“Users [will] save electricity while playing a part in protecting the environment,” he said.

Lu also explained that the company would distribute the heaters to various major industries. “Initially, the main target market for us is industrial users such as mining sector change rooms, student residences, apartment buildings and hospitals.”

Besides doing your bit to help save the planet, benefits of the system include free hot water throughout the year, a saving of up to 50% on your Eskom electricity bill, a reduction in your carbon footprint as solar heated water is green and renewable, and an annual cutback of up to 580kg of carbon dioxide emissions.

Lu added that the units could last as long as 15 years.

“Our Taiwanese investors have been manufacturing and installing industrial solar heating systems since 1991. The first system they completed for the National ChenGong University in Taiwan is still operational today, providing electrical savings for over 19 years.”

He said that Matla looks to produce 30 000 units a year, and could create as many as 110 jobs locally within the next year.

Matla employees will join a six-month “Train-the-trainer” programme in Taiwan where they will acquire skills on the maintenance and operation of the imported machines, and the manufacturing of the water tanks.

The trainees will return to East London and educate other employees on the technical aspects of production as well as on the workplace culture of the Far East.

In another programme, the IDZ and Matla will train local youth on the manufacturing and installing of the solar heaters.

For Lu one of the major aims of the programme is to expose young people to the business opportunities within the industry.

“We want to spark the entrepreneurial spirit in people here. They can decide to work for a company that installs solar systems or start their own companies. If some can do the latter, then our job would have been done,” he said.

IDZ executive manager for business development Tembela Zweni believes the programme will empower local employees as they refine their skills.

“We are excited about the partnership as it will help equip the locals not only with skills to install and maintain solar systems but also illuminate the spark of entrepreneurship amongst our youngsters.”