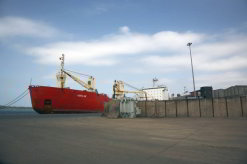 South Africa’s maritime industry is to
receive a boost with the launch of its
first chamber of commerce.
(Image: MediaClubSouthAfrica.com. For
more free images, visit the image library)

The South African maritime industry has always played a huge role in the country’s economy. In the coming year, it looks to sail further into prosperous waters with the launch of the country’s first Marine Chamber of Commerce (Samarcoc).

Major role players and industry leaders gathered in East London towards the end of February 2011 for the pre-launch of the organisation’s Eastern Cape chapter.

Samarcoc’s CEO Roland Setlako said the organisation will look to advance, promote and protect South Africa’s maritime industry and its members. It also aims to encourage black people to get involved in shipping.

“If you look at [maritime] organisations, you will see there are no black representatives. We need to establish black-owned shipping lines,” said Setlako.

He also emphasised the organisation’s goal of finding ways of attracting young people to the industry, educating them about the opportunities within the maritime structure.

The industry representatives were in East London to attract volunteers to positions within the Eastern Cape chapter. Currently, all positions in the chapter are vacant with the exception of two posts.

Setlako said Samarcoc used the gathering to nominate those who wished to become members. However, the final selections will be made at the head office in Durban.

“At this stage, appointments are made on a voluntary structure. Today, we are hoping that we would have names put forward,” he said.

There are encouraging signs of the organisation’s success with the KwaZulu-Natal chapter already filling all its vacancies. Setlako is planning to visit the remaining seven provinces to establish a chapter in each.

Currently Samarcoc has no budget or funding, and members are paying for their own expenses.

However, Bheka Zulu, a deputy director in the Department of Transport, said his department has strategies in place to facilitate financial assistance for Samarcoc.

“It is a project we hold in very high regard as it is approved by the minister,” he said, referring to transport minister Sibusiso Ndebele.

Amongst its 14 objectives, Samarcoc  aims to form institutions that will benefit the maritime industry, provide training facilities for people, and offer scholarships. The chamber also looks to establish and maintain a library and museum that will house relevant books and memorabilia.

One of the chamber’s major projects is the establishment of an international maritime protection institute. Setlako regards this as an African solution to piracy.

According to Samarcoc’s constitution, the organisation seeks to enhance the maritime industry by making information accessible to all players in the industry. It also aims to represent its members in matters that affect their common interests, and to assist members technically or financially in legal matters.

Samarcoc will serve as a strategic partner and advisor to the National Maritime Economic Development Cluster, the Development Bank of Southern Africa, and all related government departments and financial institutions.