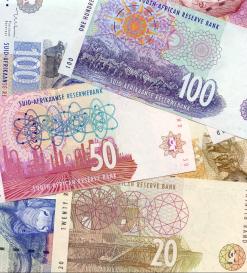 South Africa’s financial policy is sound
and the country is in shape to weather
the storm of the current financial crisis.
(Image: DHD Multimedia gallery) 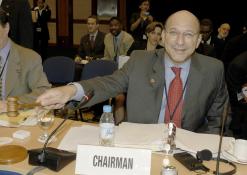 South African Minister of Finance Trevor Manuel, admired the world over for his intelligent and successful financial strategies, announced his medium term budget policy statement on 21 October 2008. In it he revealed government’s economic priorities and forecasts for the three-year period to 2010.

In his speech Manuel noted that the current global financial crisis was a storm whose ferocity could not have been expected – but he also commented optimistically that he and his department had seen it coming for years and had taken appropriate action beforehand by keeping financial policies focused on long-term growth and broad-based development.

“We can say to our people: Liduduma lidlule! The thunder will pass,” said Manuel. “We can say to our people: our finances are in order, our banks are sound, our investment plans are in place, our course is firmly directed at our long-term growth and development challenges, and we will ride out this storm, whatever it takes, together, on the strength of a vision and a plan of action that we share.”

The global economy was still uncertain, however, and Manuel envisioned two scenarios – one a deep and lingering recession in developed economies that will result in a reduction in international trade, the other a period of international co-ordination and adjustment followed by more balanced growth. He noted that the forecast for South Africa was based on the latter scenario.

South Africa’s low level of foreign debt and prudent fiscal policy-making over the last decade gives the country’s economy the means to weather the global storm, said Manuel. He added that according to the World Bank and International Monetary Fund, who conducted a financial stability assessment in April and May 2008, South Africa’s financial system is fundamentally sound and its financial sector regulatory framework is sophisticated, modern and effective.

The country will not be immune from effects such as reduced demand for exports, and a volatile exchange rate, however.

Manuel also said that the global crisis has resulted in banks losing faith in each other and therefore inter-bank lending has collapsed. In countries that have relied heavily on foreign capital, banks are not cushioned against this effect and are suffering. South Africa’s banks, assured Manuel, are healthy, fully functional and competitive. The World Competitiveness Report, compiled by the Swiss-based Institute for Management Development, ranked the soundness of South Africa’s banks at 15 on the list, above both the US and the fabled banks of Switzerland.

Continued investment into infrastructure development remains a high priority and is crucial to sustain the momentum of growth. Manuel emphasised that government will continue to improve and expand public services, will invest in essential infrastructure, and will support initiatives that target job creation and poverty reduction.

By the 2011/2012 financial year government would be allocating almost 11% of its total spending budget to capital investment, which currently stands at 9.5% of total government spending.

Manuel named a number of priorities that will be addressed by Cabinet during the forthcoming medium-term financial period. These include education and skills development; improving the provision of healthcare; investing in the criminal justice system in order to reduce high crime levels – here Manuel specified an increase in the number of police, and enhanced investigative capacity; investment in public transport and essential services; and support for those in rural areas, especially emerging farmers.

While service delivery and infrastructure took the lion’s share of the budget, Manuel also announced that South Africa’s 12.4-million welfare recipients would get a monthly R20 ($1.75) increase, with immediate effect.

Public capital investment stands at an amount of more than R600-billion ($53-billion) for the next three years, while adjustments of R59-billion ($6-billion) over the same period have been allocated for higher salaries and other costs associated with inflation.

National power utility Eskom is to receive R10-billion ($875 000) in 2008 and a further R50-billion ($5-billion) thereafter for its capital spending programme, which will be disbursed over the next three years. Funds are also to be allocated towards increased energy efficiency, reducing electricity demand, supporting renewable energy sources and providing complementary funding for cogeneration projects.

The Minister of Finance tables his national budget every year in February. As the financial year runs from April to March, the Minister also makes a budget policy announcement in the middle of the financial year. Here government’s economic forecast and budget priorities for the next three years are set out so that provinces, municipalities and departments can plan their budgets accordingly.