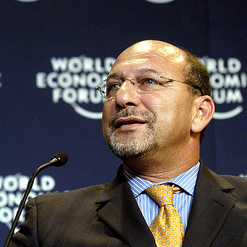 South African economists have commended Finance Minister Trevor Manuel for a responsible and realistic budget in a difficult economic climate, with the consensus that it will give momentum to a slowing economy.

In his budget speech to parliament on Wednesday, Manuel reassured South Africans that they would not bear the full burden of the international economic downturn thanks to South Africa’s sound banking system, healthy fiscal position, credible monetary policy and appropriate foreign exchange regulations.

Dr Azar Jammine, director and chief economist at Econometrix, described the budget as “sensible” in light of the economic crisis and difficulties ahead.

“It exploited the economic climate we are in beautifully,” Jammine said. He said it is also positive that the greatest areas of spending are in housing, community development, education and health.

The largest adjustments to spending plans go to poverty reduction. Some R25-billion will go to provincial budgets – mainly for education and health care – while R13-billion will go to social assistance grants. The school nutrition programme gets an extra R4-billion, and R2.5 billion goes to municipalities for basic services.

Manuel also announced that, over the next three years, infrastructure grants to municipalities will total R67-billion, and a further R45 billion will be spent on the Breaking New Ground housing programme. Together with investment in roads and public transport, these constitute a considerable expansion of public sector spending.

“These are rightly prioritised as part of our response to the current deterioration in employment and economic activity,” Manuel said.

Business Unity South Africa (Busa) also endorsed the realistic message of the 2009 budget. Raymond Parsons, deputy CEO of Busa, said the budget is in line with his organisation’s view that a supportive fiscal package is necessary.

“This will help cushion the negative impact of the economic downswing on growth and jobs in South Africa,” Parsons said.

Busa believes that while it is important to stabilise the economy this year, it is also essential to focus on measures that will help to lay the foundations for the next economic upturn. Parsons said Busa supports the continued infrastructural spending, investment in education and improved health facilities. It also welcomes, in particular, the increase in the VAT threshold.

The Institute for Democracy in South Africa (Idasa) expressed similar sentiments. It said that the budget accurately recognises the unique challenges of the current context and responds boldly to them.

“The Minister of Finance’s Speech dwelt at length on the impact of the current financial crisis on the South African economy and public finances, but moved decisively to ensure that the impact would be ameliorated for South Africans,” said Idasa’s Len Verwey.

The budget deficit announcement of 3.8% also attracted much attention. Manuel said that although the budget deficit will rise to 3.8% of GDP next year, debt service costs will remain moderate over the next three years (at about 2.5% of GDP).

“This is possible because we have had the courage to make the right choices over the past decade,” he said.

Idasa said the deficit of 3.8% is far larger than budget balances proposed in the last decade but nevertheless described it as a “bold, assertive response to the unique challenges of the present”.

Busa pointed out that while the deficit-before-borrowing is a little higher than expected, it believes that the budget has been able to combine flexibility and prudence in a manner that is positive for business and consumer confidence.

Jac Laubscher, Group Economist at Sanlam, said the budget is very much a response to the global financial and economic crisis. It is also mindful of the adverse impact it will have on the economy and the people of South Africa.

Laubscher said that the budget shows less confidence than in recent years because of the uncertainty of when and how the crisis will end. However, he believes that the shift to a more expansionary fiscal policy will be supported by an expansionary monetary policy, together with a more competitive exchange rate. In time these should have the desired effect. He is also pleased that the budget is still focused on enhancing the long-term sustainable growth potential of South Africa.

Idasa pointed out that Manuel was also right to see the roots of the present crisis less in the “impersonal workings of global financial systems” and more in the absence of an international democratic system of economic and financial governance that equitably and transparently regulates the relations between states.

As expected, the budget was not without its lighter moments. In announcing this year’s increases in “sin taxes” – duties on tobacco and alcohol products – Manuel a participant in his online Tips for Trevor campaign, which encourages members of the public to give suggestions for the budget.

Manuel said: “Mr At du Plooy has written to ask, ‘Please be a little more lenient on the tax on whisky for the old folks. We have so little to enjoy, you know things that used to happen after dark, no longer happen. All we have left to enjoy is a little entertainment before supper.’

“He asks for leniency, reminding me that this will ultimately be for my own benefit as well. A bottle of whisky, Mr du Plooy, goes up by R3.21.”