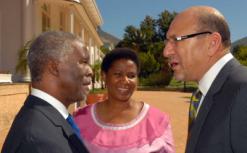 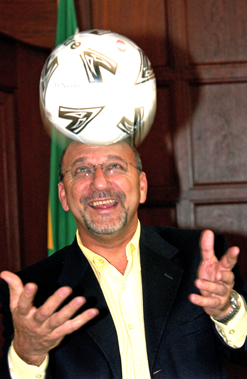 Trevor Manuel after the announcement
that the 2010 Fifa World Cup would
take place in South Africa. (Image:
MediaClubSouthAfrica.com. For more
photos, visit the image library)

The International Monetary Fund announced early in September 2008 that South African Minister of Finance Trevor Manuel will head an IMF committee to investigate and improve the organisation’s current decision-making policy and increase its legitimacy among member countries. The committee will then offer recommendations and advice on any modifications that will enable the IMF to carry out its function more efficiently.

Manuel chairs a group comprised of a number of distinguished legal and financial experts from around the world, all appointed by Strauss-Kahn.

These include Michel Camdessus, former MD of the IMF; Kenneth Dam, the Max Pam Professor of American and Foreign Law at Chicago University; former deputy director of the IMF Mohamed El-Erian, one of the world’s most respected economic and financial analysts; Indonesian Minister of Finance Sri Mulyani Indrawati, recently named as the 23rd most influential woman in the world by Forbes magazine; Guillermo Ortíz, Governor of the Bank of Mexico; Citigroup senior counsellor and former US Treasury Secretary Robert Rubin; and Amartya Sen, Professor of Economics and Philosophy at Harvard University and a 1998 Nobel laureate in Economics.

The committee’s creation follows a May 2008 report by the IMF’s independent evaluation office – the organisation’s internal watchdog – which said the leadership of the IMF needed to be more accountable for the fund’s effectiveness in overseeing the global economy, and must change to reflect the rising world economic importance of developing markets such as China and India.

The roles and responsibilities of the Board of Governors, the International Monetary and Financial Committee, the Executive Board, and Fund Management will soon come under close scrutiny. In this, the committee will add its perspective to work already carried out by other groups and individuals, including the IMF’s independent evaluation office and executive directors, as well as academics, analysts and civil society groups.

Strauss-Kahn stated that he hoped to have the committee’s input by April 2009 and that concrete proposals, based on the findings of the committee and other participants, could be established by September 2009.

“The task of enhancing the Fund’s legitimacy and effectiveness must also come to grips with the question of whether the significant changes since the establishment of the Fund require reform of the institutional framework through which members’ voting power is actually exercised,” said Strauss-Kahn. “I want to thank these eminent persons for agreeing to bring their experience, expertise, and wisdom to bear on the ongoing reform of IMF governance,” he added.

The purse strings of the world

The International Monetary Fund is one of the world’s most powerful international bodies, making decisions that affect millions of lives in developing countries. The IMF’s primary mission is to provide assistance to countries experiencing serious financial and economic difficulties by disbursing funds deposited by the 185 member countries.

The IMF is governed by its member countries, of which South Africa is one. Each appoints one governor and one alternate governor to the board, which meets once annually. The governor is usually the minister of finance or the governor of the central bank of a country. The day-to-day work is carried out by the 24-strong Executive Board, whose members are voted as directors by member countries or groups of countries. The Executive Board selects the managing director of the IMF, who serves for a renewable five-year term.

Trevor Manuel was appointed as Minister of Finance in April 1996 and has been one of South Africa’s most popular politicians, having achieved lower taxes, significant revenue overruns, a smaller current account deficit, and a shake-up of the South African Revenue Service during his tenure. Barely a year after his appointment, South Africa’s risk premium started falling on global financial markets and the country was able to borrow at lower interest rates.

Manuel serves on a number of local, regional and international boards and committees, such as the World Bank, the African Development Bank Group, and the Development Bank of Southern Africa.

In 2007 Manuel was named Euromoney magazine’s African Finance Minister of the year. He has received honorary doctorates in commerce, technology, economics and law from several major institutions, among them the universities of Stellenbosch, Rhodes and KwaZulu-Natal. In 2001 he was inducted into the South African Academy of Engineering.

Earlier in 2008, Manuel and Germany’s International Development Minister Heidemarie Wieczorek-Zeul were named by United Nations Secretary-General Ban Ki-Moon as Special Envoys for Development Finance. In 2002 the minister filled the same role for then Secretary-General Kofi Annan, where he partnered with Michel Camdessus.

Manuel and Wieczorek-Zeul have been tasked with the organisation of the follow-up International Conference on Financing for Development, which will take place in Doha, Qatar, at the end of 2008.

On 29 August 2008 Manuel, an engineer by training, was installed as the first Chancellor of his alma mater, the Cape University of Technology, by South African Minister of Education Naledi Pandor. Manuel was a civil engineering student at the university in the 1970s when it was still known as the Peninsula Technikon.

Speaking at the ceremony, Pandor said, “Trevor is a political leader who has survived stringent challenges, and a committed worker who has shown sceptics that a black South African leader of the liberation movement would and could lead South Africa to a path of economic growth and a stable respected post-apartheid business destination. “