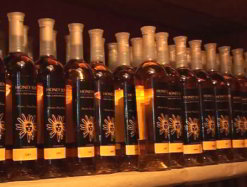 Bottles of the golden liquid are snapped
up by a growing number of mead drinkers.
(Image: Makana Meadery) 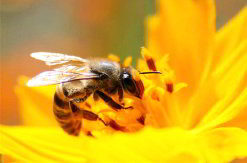 It is the hard work of the Cape honey bee
that produces the main ingredient for
Makana’s popular beverage.
(Image: Mashpedia)

Mead – although the name of this wine made from fermented honey may conjure up images of medieval frivolity, this is no longer the case.

Biotechnologist Garth Cambray and his team at Makana Meadery are proving that even a 20 000-year-old recipe has a place in today’s modern era.

Located in the picturesque city of Grahamstown in the Eastern Cape, Grahamstown Brewery – trading as Makana Meadery – was founded in 2000 by Cambray, his colleague the late Winston Leukes, and beekeeper Vuyani Ntantiso as a means to commercially produce and market iQhilika (isiXhosa, meaning “mead”).

In African culture, mead is said to give the drinker the strength of a lion. Mead is produced throughout the continent in numerous variations and in the Eastern Cape, the local Xhosa people and their ancestors have made it for centuries.

Cave paintings in the area show the ancient San Bushmen sipping iQhilika some 25 000 years ago, and their knowledge has come down through the years to the local people.

Making changes for the better

Cambray explained his interest in mead succinctly: “They stole my bicycle“.

He added: “I was a second-year student at Rhodes and needed to make some extra money for a new bicycle.” Through Leukes, he became involved with bees and beekeeping and through this, with mead production.

When it opened its doors 11 years ago, Makana Meadery had a staff count of around 15 people. The meadery is proving that even small companies can make a profound impact on areas like unemployment, skills development, technology, sustainability and biodiversity.

Makana is 50% owned by previously disadvantaged people, who now have a chance at a brighter future.

The introduction of an extensive beekeeping programme enabled Makana staff to train no fewer than 400 unemployed people – some from as far away as the Congo, according to Cambray – in the delicate art of beekeeping. This has equipped them with life-changing skills that can be passed on from generation to generation and bring in an income for their families.

“The beekeepers we’ve trained are all independent and we encourage them to sell their honey into the local market,” said Cambray. “If there is then any surplus, we buy it from them.”

A demand for mead means a demand for bees. According to Cambray, bees provide a crucial ecological service not only to vegetation but also to the human food supply.

“For instance, most canola farms keep three or four beehives per hectare as they help with the pollination process.”

A single bee in a hive can travel up to three kilometres per trip to collect nectar and can visit on average 400 flowers per trip.

“About 120 bees leave the hive every minute to do this and they do it for sometimes eight or nine hours a day,” said Cambray. In this case millions of flowers can be pollinated every day.

This also means that the taste of the honey is never exactly the same, as the bees travel to different flowers all the time. So too, the flavours in mead have subtle variations from batch to batch.

As with conventional wine, mead can be dry or sweet – the taste depends on how much honey is used during the fermentation process. The more honey, the sweeter the end result. But whatever the flavour and whatever the recipe, Cambray and his team are proving that even the harsh sting of a bee can leave a sweet taste on the lips.

Mead production is a time-consuming process and is often a labour of love rather than a pursuit of profit. The technological aspect is complicated as the fermentation process with honey takes longer than that of grapes or hops.

Cambray has redeveloped and streamlined the process, with no ill effects on the final product, which has been hailed for its authentic taste by traditional iQhilika brewers.

“All fermentation processes, be it mead or wine or beer, uses technology that is thousands of years old,” he said. “I just looked at it and thought about what would make it easier and then cut out areas where most problems arise.”

His innovation has allowed the meadery to now produce up to 15 000 bottles of mead annually. In addition to the popular drink, Makana also produces mead vinegar, honey mead mustard, conventional honey, and honey-based jams and marmalades.

Not only is Makana facilitating a positive change in the community around them, it’s showing that this can be done without a negative impact on the environment. With the growing concerns of global warming and water shortages, Cambray and his team are making progress in the areas of sustainability and biodiversity.

The beverage also does not require the use of any cultivated agricultural land or resources such as irrigation. The honey used is usually collected from local bee populations in natural vegetation.

Also, if the production process is carried out carefully, it can spur the growth of a wild bee population. This in turn causes natural forests and vegetation to proliferate. Therefore, when a bottle of mead is purchased, the consumer can rest assured that they are actively supporting the conservation of ecosystems and promoting sustainability.

The future of Makana Meadery is looking green with Cambray’s plans to eventually use iQhilika bee-pollinated sunflower oil to transport the mead wherever it may need to go. By converting sunflower oil to biofuel, the meadery’s ecological footprint is lowered even further.

A sawmill on the premises is used to provide wood for beehives, which are manufactured at Makana. More beehives, more honey, more mead. The wood is also used to make a variety of other products such as picnic tables and mead storage racks. Nothing is wasted – left-over pieces are used to make dog kennels and various sized chairs.

The popularity of Makana’s mead varieties in the US is seen in the many awards the products have won. The Africa Herbal Blossom mead took the gold medal in 2006 and 2007 at the International Mead Convention held in Boulder, Colorado, while the spicy African Birds Eye Chilli mead won silver in its category.

Although bee populations are shrinking in Europe and mead doesn’t seem to be as popular there, the hope is that African mead and all its different variations – as African regions have their own method of mead production – will begin fuelling a need for mead in Europe.