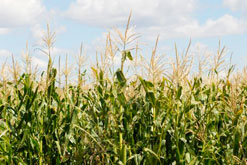 A field of maize, known in South Africa
as mealies, on a farm in the Eastern
Free State.
(Image: MediaClubSouthAfrica.com. For more
free images, visit the image library)

South Africa has achieved its biggest maize crop in 29 years, weighing in at around 13-million tons. This equates to about 4.8 tons per hectare and closely rivals the record 1981/82 yield of 14.42-million tons.

Despite a worrying dry spell at the start of the growing season, the bumper crop is attributed to better farming techniques, above average rainfall, increased use of biotechnology and a move away from sunflowers and wheat, resulting in an 8.2% increase in the number of maize plants in the ground.

This is the third year in a row that South Africa has reaped an above-average maize crop. Around 7.8-million tons is white maize and the balance is yellow, which is mainly used for animal feed.

This means that not only will the country have ample supplies for its residents, who consume around 9-tons of the grain annually, but it will be able to export about 2-million tons in both white and yellow varieties.

To date most of this year’s exportable maize produce has gone to drought-stricken areas of Kenya. About 3-million tons will leave the country next year.

South Africa is the continent’s biggest maize producer. Last year’s harvest brought in 12.05-million tons of which 1.9-million tons was carried over to 2010.

The Department of Agriculture’s Crop Estimates Committee is tasked with releasing crop estimates on a regular basis. To do this, the committee uses geographic information science (GIS) and an innovative, locally developed process called the Producer Independent Crop Estimate System (Pices).

This involves a number of steps including the use of satellite imagery, obtained from the France-based Spot Image Group, to digitally establish boundaries of crop fields, the selection of sampling points at random, and visual surveys – using light aircraft – to obtain crop data.

Once the aerial survey is complete, the information obtained is used to statistically calculate crop estimates.

This system eliminates dependency on producers’ data, which has often been inconsistent in the past.

The Pices system has digitised about 13-million hectares of crop land in all nine of South Africa’s provinces, and is constantly monitored to ensure that data is current. According to a GIS expert, this area can be covered in about two months by just three field observation teams.

But the committee’s forecast is not as optimistic for the 2010/11 season, as plantings will decline mainly due to a drop in the maize price both locally and internationally, and more severe El Niño conditions. This climate phenomenon is expected to bring good rain in spring, but drier conditions in the middle of the warm season may even lead to a drought in some areas.

In this case, commercial farmers have the option of switching to hardier crops, such as sunflowers. Maize prices are lower because of the stronger rand, the excellent current yield and the forecast of a similarly plentiful harvest in the US.

While some other Southern African countries have also enjoyed a good maize season, a drought in neighbouring Zimbabwe has placed extreme strain on this year’s crop.

Maize (Zea mays) is a grass and a staple food of people on the African continent, as well as the most common livestock feed grain.

In South Africa, which is also the breadbasket of the Southern African region, the maize sector comprises both commercial and small-scale farmers, mostly in the North West, Free State, Mpumalanga and northern KwaZulu-Natal provinces.

Maize is also used in the production of biofuel and starch, which itself is used in a number of products ranging from paint to cosmetics.

Other major crops in South Africa include wheat, sunflowers, sugar, fruit and nuts.