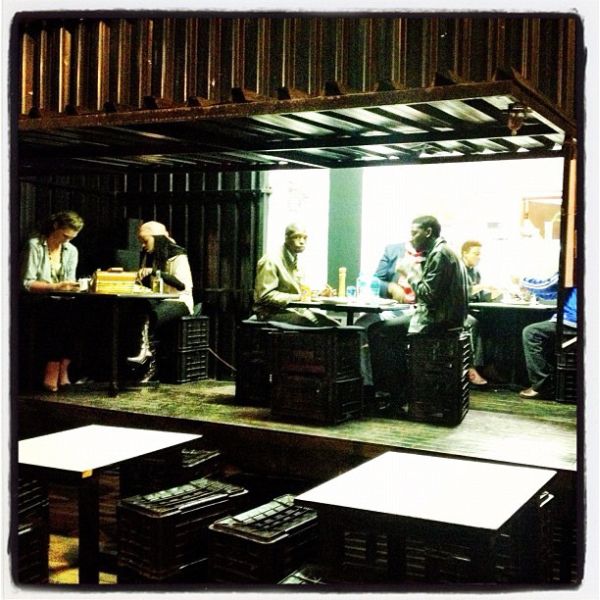 People live there. And eat, socialize, work and open businesses there. The Maboneng district has revitalized a part of inner city Johannesburg (Image: Darren Smith)

Joburg’s trendy urban neighbourhood, Maboneng is the inspiration behind a new development initiative planned for Accra, the coastal capital of Ghana.

Jonathan Liebmann, the founder of Propertuity, the company that owns and developed what many see as the embodiment of regeneration in the inner city, says he will take his Maboneng model to the West African city because “it’s in need of something alternative to the new buildings that are going up”. Although the Maboneng model is the inspiration for the new development, Liebmann says the concept will always be adapted to the local environment, while features such as mixed-use space and mixed-income housing will remain.

Maboneng, meaning “Place of Light”, is an ultra-modern take on inner city living, breathing new life into the once-derelict eastern side of the Joburg CBD. The precinct is a “mixed-use” space that offers housing, shops, restaurants and entertainment venues, as well as loft apartments, offices, a hotel, a museum and creative factory spaces, all in an urban landscape. Although the plans for Ghana are still in their infancy, Liebmann has already identified a local partner and is looking into various prospects.

With this being Propertuity’s inaugural venture outside South Africa, Liebmann says: “Our initial investment will be limited so as to not materially change our risk profile” to ensure the project doesn’t negatively affect the company’s finances. “We are still mainly focused on Maboneng as our largest investment but we feel the company has gained intellectual capital that can now be leveraged in other parts of Africa.”

He adds that Perpetuity will look to invest and develop in any city with a significant population but it largely depends on the local partners that become available. Africa offers huge growth and a unique vibrant culture that other parts of the world do not, Liebmann says.

The future of the property sector on the continent, “will follow major international trends in becoming consolidated and owned by fewer larger companies rather than being family-owned”.

The Greater Accra Metropolitan Area is home to some four million people, so it makes sense that Liebmann would venture there first. As Accra has expanded, some of the old buildings have been neglected. Large numbers of buildings have not been finished, mainly because the organisations and individuals who own them have run out of money. However, new suburban areas are being established with services and infrastructure to cater to the needs of the middle-class earners.

Present-day Accra is a modern city with British, Danish and Dutch influences, such as James Fort; Osu, now Osu Castle; and Ussherstown near the Dutch Ussher fort. It’s also home to the National Museum of Ghana, the Ghana Academy of Arts and Sciences, the National Archives of Ghana and Ghana’s central library, the National Theatre, the Accra Centre for National Culture, a lighthouse, and a sports stadium.

Over the year, immigrants from the Americas, Europe, Asia and other African countries have flocked to Accra, and the city has expanded. Ring Road, extending from the Korle Lagoon in the west, going east to the juncture of Independence Avenue, and continuing on to Osu, forms a circle around the oldest districts of the city. This area separates central Accra from the outlying suburbs.

Central Accra comprises the CBD, which is made up of the historic districts of Usshertown, Tudu, Victoriaborg, West Ridge and East Ridge, as well as the historic residential districts of Jamestown, Adabraka, Asylum Down, North Ridge and Osu. Residential areas are mostly found in eastern Accra or north of Ring Road East, stretching as far north as Kwame Nkrumah Motorway. Western Accra, on the other hand, is a mix of residential and business.

Together, they are home to about 58% of Accra’s total population; and most of the city’s informal businesses are situated in low income areas. In the inner city, low income structures are built with minimal room to expand.

Accommodation in middle income areas, which are largely populated by Ghanaian citizens, has been provided by state, parastatal and private sector organisations and individuals. These suburbs include Dansoman Estates, North Kaneshie Estates, Asylum Down, Kanda Estates, Abelempke, Achimota,Adenta and Tesano. Buildings here are better than those in low income suburbs since they have been planned. The middle income group makes up 32% of the city’s population.

Liebmann was drawn to property development because of its “necessary scale to be able to create change”. He says: “I am obsessed with good design as I believe design can be a major tool to transform an environment… Regeneration is a focus of our company so we like to start with areas that really need attention. The area [Maboneng Precinct] made sense in that it’s very centrally located and has beautiful old buildings.”

Propertuity is focused on transforming areas by designing and developing iconic properties to create an “integrated and uplifted urban environment”. “I enjoy the character and design of the old buildings; I have been exposed to them on my travels and so have seen the way that they can be converted into new spaces,” says Liebmann.

Speaking about the driving force behind taking such a massive risk with Maboneng, he says: “It started with my personal needs to live and work in alternative spaces. I am also a true urbanist so for me, reconnecting with the urban core was the driver.

“Our 2020 vision for Maboneng is to grow the community to 20 000 people. We have 30 buildings in the pipeline to be developed in the next three years.” Liebmann is one of the youngest property developers in the country and says his age has allowed him to be fully committed to his work and have the energy to take on numerous tasks.

Propertuity has recently concluded an agreement with Arrowhead Properties for the company to buy eight buildings in the Maboneng Precinct for R180-million. The acquisition, at a forward yield of 11%, is in line with Arrowhead’s strategy to procure “revenue-enhancing properties”. The buildings will be managed by specialist CBD property managers Mafadi Property Management.

These eight buildings, with a to let area of 58 000m2, are mainly industrial, with a smaller component of office and retail. “We will use the funds from this sale to propel Maboneng into its next development phase,” says Liebmann.

Propertuity intends to develop and sell more properties to Arrowhead in a mutually beneficial relationship. Propertuity focuses on development and Arrowhead on acquiring developed property with solid yields. Arrowhead’s overall strategy is to increase its portfolio to R10-billion by 2016 by obtaining properties that offer attractive yields. It currently owns properties valued at more than R5-billion.

Liebmann founded Propertuity in 2008 with a vision to create a well-designed and affordable integrated urban offering in Johannesburg. That year, the company made its first acquisition and along with architect Enrico Daffonchio, designed and developed Arts on Main, which offers a space for creatives to live and work. By 2009, Arts on Main was completed and celebrated artist William Kentridge and the art-focused Nirox Foundation’s NIROXprojects gallery moved in as tenants.

Following its success, Propertuity initiated plans to develop the surrounding area to form a “connected urban neighbourhood”. This led to the company acquiring its second structure just 500m from Arts on Main, at 286 Fox Street; in 2010, Main Street Life was completed. It has 194 residential apartments, a boutique hotel and ground floor shops. That same year, Propertuity began construction on Revolution House, on the corner of Kruger and Main streets; The Main Change, at 20 Kruger Street; and Fox Street Studios, at 280 Fox Street.

The Maboneng Precinct is made up of a number of completed and “in the pipeline” developments which include:

Arts on Main was recognised for its original use of public space when it scooped the Johannesburg Development Agency’s Halala Award for “Relaxing and Playing Joburg: the recreation destination” in 2010. The category recognises “creativity and innovation through the use of new and old buildings that provide unique recreational spaces”.

In 2012, The Main Change won the Halala Award for “Working and Buying Joburg: creating a business destination”, which identifies innovative commercial and retail developments that attract people to the business hub.

Liebmann was invited to speak at TEDxStellenbosch in 2011 on how his projects had developed a vibrant community and creative hub in the Maboneng Precinct.

He has participated in many forums, including the World Economic Forum on Africa in Addis Ababa, Ethiopia in May 2012, where he represented Johannesburg and South Africa on the global stage. At the event, Liebmann was asked to speak on Urban Africa. He championed the regeneration of blighted urban areas and spoke about his company’s vision to rescue old office blocks and warehouses in Johannesburg and convert them cultural hubs, with galleries, artist studios, offices and retail spaces for the creative community. 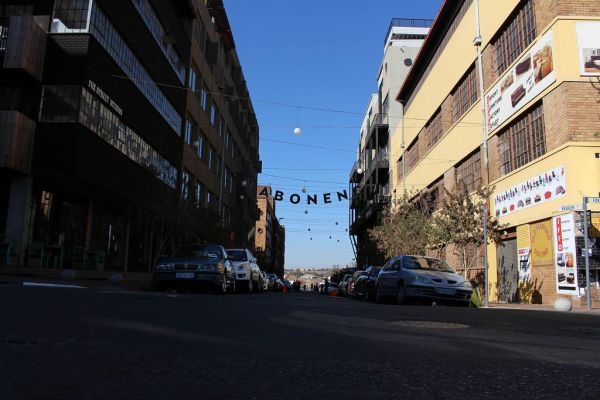 The success of Maboneng has breathed new life into the city. Now Jonathan Liebman hopes to emulate that success in Ghana. (Image: Pascal Parent)