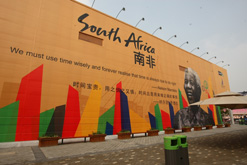 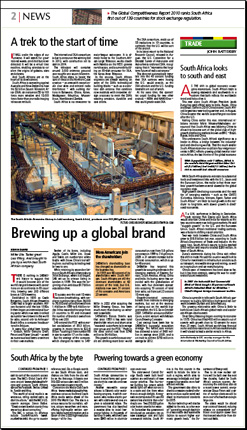 As the shift in global economic power gains momentum, South Africa’s trade is moving eastwards and southwards in a pattern that both reflects the worldwide trend and helps drive it.

This underscores South Africa’s significance as a leader in Africa, a bridge between the industrialised and developing worlds. That the much smaller South African economy could join four mega-economies in BRIC reflects growing global investor interest in Africa, the last frontier of the global economy.

With a population near 1-billion, Africa is the world’s third-largest market after China (1.3-billion) and India (1.1-billion) and is rich in mineral and natural resources.

While South Africa aims to maintain its substantial trade and investment links with the US, Japan and the European Union, the reality is that these markets’ growth has been severely slowed by the global economic crisis.

High-growth developing economies and the next tier of emerging markets – such as the Civets (Colombia, Indonesia, Vietnam, Egypt, Turkey and South Africa) – are likely to lead growth in the medium to long term, with slower growth in developed economies.

At a UN conference in Beijing in September, trade minister Rob Davies said South Africa would prioritise China and India for exports as the two countries were now its biggest markets. He said “sluggish growth” in the US and the European Union, South Africa’s traditional trading partners, was a factor in shifting export priorities.

Zuma’s statements during his China visit reflect this shift in trade. He said the country would look to China for investment in infrastructure projects such transport, renewable energy and mining, as well as in agriculture and car manufacturing.

China’s pace of investment has been slow so far, but it has been strategic, paving the way for accelerated future investment.

In 2007 the Industrial and Commercial Bank of China bought 20% of South Africa’s Standard Bank for $5-billion (R35-billion) – China’s largest foreign investment to date. China is currently in talks with South Africa’s government to build a $30 billion high-speed rail network between Durban and Johannesburg.

The growing relationship with China is likely to both boost South Africa’s global trade and accelerate African development.

Since Deng Xiaoping began opening its economy in 1979, China has lifted 400-million people out of poverty with growth close to 10% for more than 25 years. South Africa’s world-class financial sector and deep experience in African markets make it well-placed to lead similar miracle in Africa.