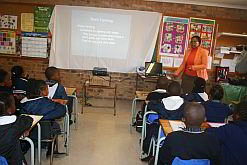 Thousands of teachers have recently
been appointed in Limpopo.
(Image: Bongani Nkosi)

The Limpopo Provincial Government recently announced that it created 62 400 jobs over the first quarter of the current financial year – a move made in response to the New Growth Path (NGP).

The province made a commitment earlier in 2011 to create over 166 100 jobs within its spheres of government. It has described its efforts so far as an achievement.

“Job creation is one of the key priorities that we have set for ourselves as government,” the province’s Premier Cassel Mathale said.

“We are working full throttle to translate our commitment to make 2011 a year of job creation through meaningful economic transformation and inclusive growth into reality,” he added.

Through the NGP, South Africa has the challenge to create no less than 5-million jobs and slash the unemployment rate by 10% over the next 10 years. The government has vowed to do its best to achieve the targets, and has called on the private sector to help.

The jobs in Limpopo were created in various government departments. With 19 978 jobs, the Department of Roads and Transport led the drive. It was followed by Department of Education with 17 890 vacancies filled.

Positions for nurses and doctors were filled across the province, with the Department of Health generating 8 860 jobs.

Up to 2 566 vacancies were filled in the Social Development Department, while the public agriculture sector produced 1 536 jobs.

The Department of Public Works created 581 jobs, while 939 people found employment in the Local Government and Housing Department.

Fifteen jobs were filled in the province’s Department of Sport, Arts and Culture, and two in Safety, Security and Liaison.

“Our government is committed to fight against poverty and unemployment in a quest to improve the livelihoods of the people of our province,” he said.

The Extended Public Works Programme (EPWP) has resulted in 17 800 new jobs in different sectors across the province.

A clear indication of gains made would only surface once departments in all spheres of government, ranging from local to provincial and national, make their figures public.

News of Limpopo’s progress came a day after Statistics South Africa announced that the national unemployment rate jumped to 25.7% in the second quarter of 2011. It stood at 25% in the first quarter, so that means thousands of formal-sector jobs have been lost since the start of the year.

According to Statistics South Africa, the number of unemployed people rose by 174 000 to 4 538-million people between April and June.

The organisation said major job losses were recorded in the provinces of Gauteng, North West and the Eastern Cape, with a combined total of 81 000.

Gains were experienced in KwaZulu-Natal and the Western Cape with 71 000 and 21 000 new jobs respectively.

Most jobs were lost in manufacturing and mining – the sectors which suffered the most during the global recession.