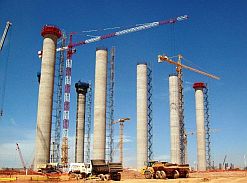 Kusile is being built in Emalahleni,
Mpumalanga.
(Image: Eskom)

Construction of the coal-fired Kusile Power Station will not be cancelled, as previous media reports stated, because the facility is much needed to meet South Africa’s growing electricity demands, the government has said.

This is according to a statement made by Department of Energy spokesperson Bheki Khumalo, who was responding to the inaccurate reports. “There is no viable option … to replace Kusile,” he said.

“The department wishes to state categorically and without equivocation that Kusile Power Station is on the table,” Khumalo added.

Kusile means “it has dawned” in local Nguni languages.

Construction began in 2008 at Emalahleni, formerly known as Witbank, in Mpumalanga province – which has the richest coal reserves in the country.

Upon completion the station will be the “second most advanced coal-fired power plant” in South Africa after the Medupi power station, which is currently under construction in Limpopo province, according to power utility Eskom.

Eskom secured a loan of R28-billion (US$3.7-billion) from the World Bank on 8 April 2010 to finance the construction of the 4 800MW Medupi power plant. Once operational in 2013, it will be the country’s biggest generator of electricity.

This will be a welcome addition as electricity reserves are low, the Minister of Energy Dipuo Peters has stated, and failing to address this now will undoubtedly lead to a repeat of 2008’s load-shedding and widespread blackouts – which were crippling to the economy.

Medupi is being built near the currently operational 3 990MW coal-fired Matimba power station.

Some 5 200ha have been set aside for Kusile, which will be positioned close to the existing 4 116MW-capacity Kendal power station. The site on which Kusile is being built was previously used for agriculture.

Kusile is part of the government’s plans to ensure South Africa has enough power for the future, Khumalo said. “In the absence of Kusile, there will not be enough power to feed into the South African electricity grid,” he added.

The entire Kusile plant is set for completion in 2017, but the first unit will be finished and ready for commercial operations by 2013. Eskom said in 2008 that the plant would cost an estimated R80-billion ($10.8-billion) to build.

Anglo Coal South Africa, through its black economic empowerment subsidiary Anglo Inyosi Coal, will supply Kusile with 17-million tons of coal over a period of 47 years.

According to Eskom, Kusile will be the first power station in South Africa to use Flue Gas Desulphurisation technology, which will reduce the plant’s harmful sulphur dioxide emissions.

Eskom is aiming at generating 12 300MW more power to feed into the national grid by 2017, as it’s estimated that South Africa will need about 40 000MW of electricity by 2025.

The state-owned utility has also reached an agreement with independent power producers, who are expected to add about 400MW to the grid in the future.

Eskom is also constructing the multibillion-rand Ingula power station, whose first unit is set to be commissioned in 2012. Ingula, a hydroelectric plant, is being built on two dams on the border of KwaZulu-Natal and Free State provinces.

It will comprise four hydroelectric turbine units, each generating 333MW of power. The plant is one of the biggest environment-friendly projects Eskom has ever initiated.