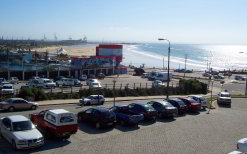 The King’s Beach area in Nelson Mandela Bay Municipality is being revamped, and residents and visitors will be able to enjoy new landscaped gardens and water features there from March 2012.

The Mandela Bay Development Agency (MBDA) has kicked off with its latest project to upgrade the neglected and run-down area at a cost of R42-million (US$5.4-million). The MBDA is responsible for inner city regeneration on behalf of the municipality and will manage the entire project.

“It is the city’s premier beach and therefore plays a major role in the tourism package offered by the city. The area has been identified for a much-needed facelift and refurbishment. It needs to be revitalised,” says MBDA chief operations officer Pierre Voges.

The development, taking place in phases, will include the redevelopment of the skate park and improved parking facilities. The entire project is scheduled for completion by February 2013, provided there are no budget constraints.

The upgrade has been welcomed by the business chamber in the city.

“This kind of local government investment in infrastructure and basic services, like cleaning and security, is necessary to support tourism. The work of the MBDA has proven that this kind of investment acts as a catalyst for further private sector investment and confidence,” says CEO of the Nelson Mandela Bay Business Chamber Kevin Hustler.

The King’s Beach area stretches from the super tubes at Humewood to the McArthur Swimming Pool.

The plan for King’s Beach is to retain much of its former character, but improve the security, lighting and landscaping in the area.

“It is hoped that the end result will bring about the recreation of one of the jewels in the city’s tourism crown, attracting not only the spending power of outside visitors, but drawing the city’s own residents to enjoy and appreciate the area again,” says MBDA.

Once completed, residents and visitors will be able to walk along a 5km route covering the entire beachfront area of Port Elizabeth, from Humewood in the northwest to the beach at Pipe and Flat Rocks in the south and beyond.

Starting just after this stretch of beach is Cape Recife Nature Reserve, a coastal reserve which offers more hiking opportunities.

One of the main components of the upgrade will be water features. The waterways will be fed by water from an old spring located in the basement of The Beaches apartment building and from storm water run-off.

Voges notes that this will be the first time that water from the spring will be put to good use, instead of just being pumped into the sea as was done in the past. The water in the pools will be circulated and cleaned thorough filters and reed beds.

In the early 1980s the then city engineers department commissioned a Beachfront Structure Plan to guide development of the beachfront areas from King’s Beach to Cape Recife.

However, only Shark Rock, which includes Hobie Beach and a small portion of King’s Beach, were ever redeveloped according to this plan. After that, the city’s budget was re-prioritised and no more funding was allocated to development of the southern beachfront.

Over the years the greater King’s Beach area has become run-down and unattractive, with visitors preferring to spend time at the more attractive Shark Rock Pier and Hobie Beach areas.

There’s been little use of the magnificent stretch of unbroken beach area and surrounding property of King’s Beach.

Taking it in phases

The MBDA will handle the development in two phases, with phase two comprising of two stages due to budget limitations.

Phase one, set to be completed by March 2012, will cost R10-million ($1.3-million) and will include the development of the water features and all associated infrastructure, pathways, grassing and fencing of the pool areas.

The most expensive development will be done during Phase 2B with the planned expansion to the skateboard facility and the redevelopment of the existing King’s Beach car park at a cost of R29-million ($3.7-million). The parking area will have to be re-levelled due to complications with storm water run-off.

A later phase of the King’s Beach development will see Marine Drive downgraded from the current high-speed thoroughfare to a road where slower speeds will be encouraged.

Traffic will be redirected toward Strandfontein Road to make way for more parking areas along the southbound carriageway.

Phase two is expected to start in July 2012.

“The construction of phase two will depend largely on the Nelson Mandela Bay Municipality’s budget allocations in the next financial year,” says Voges.

The MBDA launched its latest project, the Donkin Reserve upgrade and Route 67, during Heritage weekend in September 2011. The development includes the extensive use of public art and was done in the form of a walk, taking the visitor from the Campanile at the bottom of Strand Street, to the Donkin Reserve located on Donkin hill in Central.

Route 67 pays tribute to the public life of Nelson Mandela and the country’s road to democracy.

Close by, the Athenaeum Building in Belmont Terrace has also been restored to its former glory and will now be used as an arts and crafts hub.

The Athenaeum and Donkin Reserve upgrade forms part of the agency’s overall inner city regeneration efforts of which the Govan Mbeki Avenue and Parliament Street upgrades were the first. The idea behind these efforts is to draw residents, businesses and tourists back into the heart of the city.

There has been renewed business interest in the inner city as a result of the municipality’s regeneration efforts, says Hustler. The Govan Mbeki Avenue upgrade has created a bustling shopping area, but he says there are still some areas of concern with run-down buildings and security.

Businesses are also showing interest in the area, with upgrading that has started on the Donkin Terrace houses and plans for this to become a “creative quarter”.

Parliament Street, its surrounding streets and the Richmond Hill area are also attracting more business, as a range of new restaurants and coffee shops have opened there.