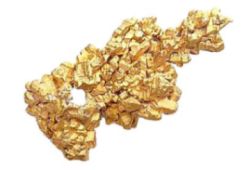 It is gold nuggets such as this one that
will be transformed into jewellery for
lucrative overseas markets.
(Image: Dorling Kindersley) 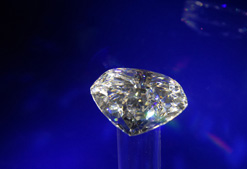 An exhibit of a replica of the famous
Centenary diamond at the Big Hole
of Kimberley.
(Image: Graeme Williams, MediaClub) 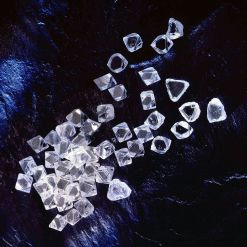 Kimberley is one of the world’s major
diamond mining centres.
(Image: De Beers)

Kimberley, the capital of the Northern Cape province, is home to the huge open-pit diamond mine known as the Big Hole, one of the largest hand-dug holes on earth. Now this town, a hub of the global diamond industry, is about to become a major player in gold jewellery manufacturing with the construction of a R100-million (approximately $14-million) factory.

The initiative falls under the government’s Minerals Beneficiation Strategy, which is controlled by the national Department of Minerals and Energy (DME). This strategy aims to encourage greater value-added processing that transforms all minerals mined in South Africa and the Southern Africa Development Community into more refined end products.

Known as Gold Chain Technology, the project was launched in May 2008 to help escalate production of the precious metal, and to create employment opportunities in the jewellery manufacturing sector.

The project focuses on the production of gold and silver chains for overseas markets, with an eye on the lucrative American market. “It is expected that in four years time an estimated 300 people will be employed and the factory will process a substantial tonnage of gold and silver jewellery,” said Northern Cape premier Dipuo Peters, speaking at the Gold Chain launch. It is expected that the total retail value of Gold Chain products will approach R1-billion annually within five years.

According to the office of the Premier, the jewellery factory’s output will mainly target overseas markets, and the US in particular. The annual global demand for gold products is over 2 800 tons, and the biggest markets are located in India, the US and China.

The Johannesburg-based development finance institution known as the Industrial Development Corporation (IDC) has assisted with funding of Gold Chain. “This is a key opportunity for facilitating empowerment in the jewellery manufacturing sector, while continuing regional development among the poorest communities in this country,” said Abel Malinga of the IDC’s mining strategic business unit.

In a related move, the newly launched State Diamond Trader has been set up to purchase 10% of all diamonds produced in South Africa and sell them to local diamond cutters and polishers. The DME-owned entity was formed to create jobs by lowering barriers to entry into the diamond industry for small or previously disadvantaged traders, boosting local beneficiation in the industry, and particularly to make the precious stones available to smaller cutting and polishing outfits.

“It is government’s policy that South Africa learns ways and means of adding value to our minerals so that we can realise the same benefits that are enjoyed by the developed world,” said Minister of Minerals and Energy Buyelwa Sonjica at the launch of the State Diamond Trader in February 2008. “It is for this reason that the Department of Minerals and Energy saw the need to establish the State Diamond Trader with a view to ensuring that our rough diamonds are shared equitably and beneficiated locally.”

Diamdel, the diamond trading division of global diamond giant De Beers, is assisting the new entity with technical and intellectual property aspects. It is not yet clear whether the 10% rule will apply to South Africa’s other natural mineral resources such as gold and platinum.

Transformation is also part of the strategy, with development incentives and assistance to finance for marginalised and smaller traders, as well as security with delivery of raw materials.

As the third-largest producer of diamonds worldwide, South Africa produces diamonds worth about $1.4 billion (R10 billion) each year, contributing to a total world market for uncut stones of about $13,4 billion annually. According to the IDC the local industry struggles with a constant shortage of rough diamonds and idle processing capacity, in spite of South Africa’s extensive production output.

Gold mining a cornerstone of the economy

Gold brings more foreign revenue into South Africa than any other resource, contributing 27.4% to the economy. The gold-mining industry also provides jobs for more than half of South Africa’s mine labour force.

South Africa’s main gold-producing area, the Witwatersrand basin in Gauteng, has been mined for more than 100 years and even after some 41 000 tons of the precious metal has been taken from the ground it is still considered to be the world’s greatest unmined source of gold. The country’s major gold-producing companies are AngloGold, Gold Fields, Harmony and Durban Roodepoort Deep.

Until 2007 South Africa was the world’s foremost gold producer, at which point China overtook it. South Africa’s mines have undergone restructuring and cost-cutting exercises in recent years, as the extreme depth of many of them also means that they have the highest production costs in the industry. Increased productivity has been targeted as a key to boosting the rate of production, and the DME has set up several interventions in order to achieve this goal.

The diamond rush in Kimberley produced vast wealth and success, but also much heartbreak. It all started in 1866 when Erasmus Jacobs found a small white diamond on the farm De Kalk, situated on the banks on the Orange River. A few years later diamond deposits were discovered on the farm Vooruitzig, which belonged to the De Beers brothers. A mere year later a mining town with over 50 000 inhabitants had sprung up around the excavation known as the Big Hole, which had yielded 2 722 kg of diamonds by the time it was closed in 1914.

The town received its name in 1873 in honour of John Wodehouse, the first Earl of Kimberley and the British Secretary of State for the colonies at the time. It wasn’t long before Kimberley had developed into a substantial town, where previously there were only tents. In 1882 it became the first town in the southern hemisphere to install electric streetlights. South Africa’s first stock exchange was established here in 1891, and in 1904 the country’s first electric tram took to the rails.

Two giants of diamond mining emerged from the thousands who tried their luck – Cecil John Rhodes and Barney Bernato, rivals for dominance in Kimberley. In 1880 Barnato founded the Barnato Diamond Mining Company, while Rhodes established De Beers in the same year.

Eventually Rhodes outmanoeuvred Barnato, who was forced into a merger with his adversary. De Beers Consolidated Mines Limited was established in 1888, with Rhodes as its founding chairman and Barnato, FS Philipson-Stow, Alfred Beit and Rhodes as the major shareholders. The company listed on the Johannesburg Stock Exchange in 1893. Today it operates in 25 countries and is active in all spheres of diamond mining, including open-pit, underground, large-scale alluvial, coastal and deep sea. It is controlled by mining giant Anglo American with 45%, Central Investments DBI with 45%, and the Debswana Diamond Company which owns 10%. Botswana-based Debswana, a joint venture between De Beers and the government of Botswana, is the world’s leading producer of diamonds by value.

Kimberley came under siege from the Boers during the South African War of 1899 to 1902. The siege lasted 124 days, during which telephone lines were cut and women and children were sent down into the mines for protection. The British re-claimed Kimberley in February 1900 following a spectacular gallop into the town by the British cavalry under General John French, first Earl of Ypres. The Battle of Magersfontein was fought in 1899 near Kimberley, and is considered to be one of the war’s most significant defeats for the British.