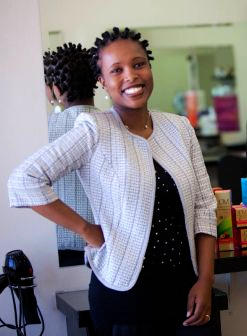 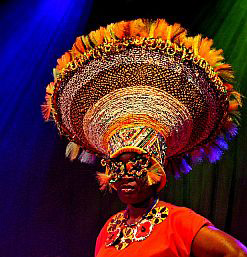 JOM Cosmetics became the first company to receive an EU Ecolabel of environmental excellence. Worldwide it is the only cosmetic brand that has achieved this.
(Images: JOM Cosmetics)

Her products are changing the cosmetic industry, for the first time offering women an alternative to harmful chemical-based hair products.

“I want to show black women that their natural hair is a gift to be celebrated,” she says.

And to think that it all started with Moriti’s frustration with bad hair days. What she thought was a throwaway dream has turned into an international success story.

Recently it became the first company to receive an EU Ecolabel of environmental excellence. The certification is only awarded to products and services that meet high environmental standards throughout their life cycle, from raw material extraction to production, distribution and disposal.

“This is a prestigious award,” she says. “Worldwide we are the only cosmetic brand that has achieved this.”

Identifying a gap in the market

“Over the years I tried every relaxant on the market but my hair just became increasingly unmanageable. This is what finally drove me to start experimenting with my own hair formulas,” Moriti tells.

Moriti, who is trained in analytical chemistry, wanted to make a product that would work effectively, but as she did more research she realised the chemicals in relaxants strip and destroy the structure of black hair.

“I realised I could use ingredients without after-effects. A lot of research worldwide shows that chemical relaxers are highly toxic,” she says.

“I thought to myself, what’s wrong with curly hair?” – and this is how the idea was born. She dedicated her time to develop a formula with only natural ingredients that nourish natural curls, creating soft, healthy hair that is easy to grow, work with and style.

But turning the idea into a viable business and product was Moriti’s biggest challenge.

She was looking to introduce an entire new range of products – the first of its kind on the market – and she was competing with some of the biggest names in the cosmetic and hair care business.

“Other big name companies have been formulating synthetic products for years and if they want to enter into the natural products market, they usually just buy out companies,” she says.

Being a newcomer was scary and even though she knew that the natural products market was set for major growth, making a name in the industry was a daunting task.

“When I started I realised the natural market was not big, but that it would grow as people become more health conscious and look for alternatives to synthetic products,” she says.

Getting into the market

Moriti spent a year visiting hair salons in the Western Cape – up to ten a day – to introduce her product, pretending to be a sales rep to make sure the feedback she received was honest.

“Everyone I demonstrated it on loved it, but distributing this way was never going to reach more than a relative handful,” she says.

What she needed was a retailer who would take the product to the larger market.

The Pick n Pay Foundation, through its small business initiative, recognised the product’s potential and introduced it to its stores nationally as well as in neighbouring countries. It also helped with expansion into Europe – JOM Cosmetics participated in a trade expo in Spain, where they won a sponsorship to set up an office there.

When the range was launched in South Africa Moriti and her team were overwhelmed by the positive feedback.

“The response we had was amazing. Most of our clients are people that have lost their hair because of excessive use of chemicals,” she says.

The products are also safe for use on children and people who are prone to skin conditions such as eczema.

Moriti’s vision of creating alternative hair care products has made it possible for more women to maintain natural hairstyles, and for this JOM Cosmetics won an award in the SMEs category of South Africa’s Most Influential Women in Business and Government Awards for 2012.

The awards recognise inspirational women achievers in business and government who are working for the benefit of South Africa and its future generations.

“When you start a business, you do it because you see a need, because it is your job and you are doing what you love.” The accolades have inspired her to achieve even more.