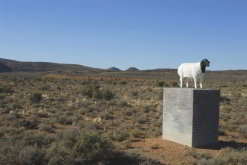 Black emerging farmers are beginning to find their feet in the tough environment of commercial farming, with success stories being recorded in the Eastern and Northern Cape provinces.

The majority of the 17 000 wool sheep farmers living in the former Transkei and Ciskei regions – located to the north and south of the Kei River in the Eastern Cape, respectively – are small farmers, running herds of 20 to 30 sheep on average.

On their own, these farmers would struggle to make a sustainable living but thanks to a mentorship and support programme offered by the National Wool Growers Association of South Africa (NWGA), these same farmers are now serious players in the wool export industry.

The NWGA’s Training and Development for Communal and Emerging Wool Farmers programme aims to pool resources and establish ongoing mentorship. Started in 1997, it has helped to increase the bale volumes of the region’s farmers from just over 222 000 kilograms in 1997 to a hefty 2.9-million kilograms over the last season.

“We teach them everything from shearing their sheep, to classing the wool and packing it properly into bales,” says Leon de Beer, GM at the Port Elizabeth-based NWGA head office. “We also introduce them to wool brokers.”

The programme follows a five-tier approach:

The programme has made a huge difference to the income and overall social status of the farmers, adds de Beer. The rand value for the area’s 2010/11 season is estimated at almost 70-million (US$8.9-million), of which 90% is earmarked for export.

The genetic improvement aspect has also brought about significant change to the quality of the wool produced in the area. With help from the NWGA, farmers from areas bordering the Ciskei and Transkei have gradually been building up the genetic quality of the local herds with superior breeding rams.

To date, almost 28 000 rams have been introduced into local herds over a nine-year period.

Far removed from the rolling green hills of the beautiful Transkei and Ciskei, lies the Hantam district of the Great Karoo, a semi-arid farming area in the Northern Cape, known for its delicious mutton.

It is here that farmer Gawie van Wyk and his brother-in-law Jannie van Heerden set up the Jagpan Vennootskap Boerdery in 2007, a mentorship project with emerging farmers.

“Our motivation was to make a contribution, to do something to help. I grew up in the area and know the people very well,” says Van Wyk, who is also NWGA’s production adviser in the district.

Located 120 km from the small town of Carnarvon, the initiative has already won accolades from the Rural Development and Land Reform Department for its financial systems.

“We lay great emphasis on the financial management of the farm,” says Van Wyk.

Van Wyk and Van Heerden are mentoring four famers – Patrick Sacco, Jan Moolman, Dirk Sacco and Ismael Louw. Three of the group have never farmed commercially before, and for the moment all of them are still part-time farmers. With the exception of Louw, the others still hold down nine to five jobs during the week, with farming activities restricted to the weekends.

A business model that works

Jagpan’s business plan is simple and ensures success for all three parties – the state, the emerging farmers and the two mentors. The state has allowed the partners to lease the land for a seven-year period at no cost, but with commitments to manage and maintain it.

At the outset of the project four years ago, the state donated 400 Dorper ewes to the initiative. These are locally-bred sheep, developed by cross-breeding the Dorset Horn and Blackhead Persian varieties. The breed is well suited to hot, dry areas and is known as a fast-growing meat producer.

The Dorpers were run with 400 ewes belonging to Van Wyk and Van Heerden.  The 800 sheep were farmed as a unit with a 50% profit share going to the trainees and 50% going to the two mentors.

The emerging farmers are required to build up their own flock to 800 ewes within seven years. As this happens, Van Wyk and Van Heerden gradually reduce their own ewe numbers and their percentage of the profits accordingly. The farm is already running 600 of its own Dorper ewes.

It wasn’t all plain sailing though. After experiencing two excellent years the farmers had a tough season in 2010, losing a lot of sheep to Rift Valley Fever. Van Wyk believes the emerging farmers may not have been able to sustain their efforts were it not for the mentorship and support provided during this difficult period.

But he sees a promising future. “By the end of the seven years, they’ll be self-sustaining,” he believes.

The Transkei and Ciskei are two of the four formerly independent homelands created under the apartheid government in the 1970s. The other two homelands were Bophuthatswana and Venda. The Ciskei and Transkei are now part of the Eastern Cape Province.

The Transkei boasts some of the most spectacular seascapes in South Africa, many of which remain largely untouched, prompting the use of its other popular name, the Wild Coast.

The Wild Coast is a favourite tourist spot for the more adventurous as roads can be sub-standard in places, but awards the visitor with places like the Hole in the Wall and Wavecrest, the southern-most mangrove swamp in the world.

Inland, visitors are treated to the sight of soft rolling hills dotted with homesteads still built in traditional fashion, with clay walls and thatch roofs. The area’s inhabitants, the Xhosa people, live mostly off subsistence farming and the local tourism industry.

The Ciskei region is home to Bhisho, the capital of the Eastern Cape. The area is poor and most inhabitants exist on subsistence farming.

The Ciskei has a small stretch of pristine coastline, offering great opportunities for hiking, such as the rewarding Shipwreck hiking trail, which allows hikers the opportunity to really “rough it”.