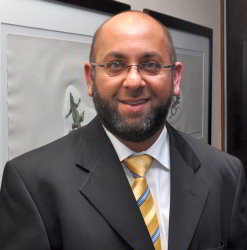 South Africa has the potential to position
itself as a leading Islamic finance hub
on the continent.
(Image: www.systemoflife.com)

South Africa has the potential to position itself as a leading Islamic finance hub on the continent, creating more opportunities for foreign investment, trade and new business partnerships.

Five journalists from leading business and finance publications in the United Arab Emirates (UAE) are on a four-day tour of Pretoria, Johannesburg and Cape Town.

The purpose of the Johannesburg leg of the tour is to give the Arabic media a better understanding of South Africa’s business, regulatory and policy environment as well as specialised Islamic business and finance in the country.

The tour also aims to highlight trade figures, investments and business partnerships with the UAE and other Gulf Cooperation Council countries.

Islamic finance is becoming an important player in the finance sector. In South Africa, the market share of Islamic finance is still small in comparison with conventional banking, but this is expected to change.

With more education, information and awareness about Islamic banking, it could become an attractive alternative for consumers and investors, irrespective of their religion.

What distinguishes Islamic finance from conventional banking is that it has to be in line with Islamic law, also known as Shari’ah, which is based on principles set out in the Qur’an.

“There is a misconception that Islamic banking is only for Muslims,” says Nazeer Cassim, Al Baraka Bank’s area manager for Gauteng.

“In fact, Al Baraka is an authorised financial services provider; the only difference is that our products are based on Islamic principles.”

Islamic banking has the same purpose as conventional banking: to make money for the banking institute by lending out capital. However, because Islam forbids simply lending out money and earning interest, Islamic rules on transactions have been created to avoid this problem.

Cassim says that Islamic banking deals in assets and this means that no credit or overdraft facilities are permitted. Shari’ah promotes profit-sharing and prohibits the payment or receiving of interest in any transaction.

Al Baraka, which was established in 1989, has an external Shari’ah committee of local and internationally-renowned Islamic scholars who oversee banking operations and product development. Al Baraka in South Africa also has its own in-house Shari’ah supervisory department.

Al Baraka is a subsidiary of the Bahrain-based Al Baraka Banking Group, one of the largest international banking groups in the world. It is also a member of the Accounting and Auditing Organisation for Islamic Financial Institutions.

An extract from the Milpark Business School banking study guide authored by Shaikh Ziyaad Mahomed, founder and director of the Islamic Finance Institute of Southern Africa, reveals that Islamic finance has become a thriving industry in the past 40 years because of numerous factors.

Islamic banking and finance has served the needs of not only Muslims, but also investors who are looking for investment instruments based on a high moral and ethical standard.

Spreading the message of certainty

One of the major drawcards of Islamic banking is its continued stability. This has become important in the current economic climate, particularly in light of the devastating effects of the global recession and Euro debt crisis.

“Because of its robust asset-based model, Islamic finance is considered more secure than conventional banking systems,” Cassim says. “Following the global recession in 2008, Islamic banks proved to have weathered the recession better than the conventional banks.”

Proposed amendments to local tax legislation to make Islamic finance transactions more commercially attractive is another indication that South Africa is responding to this growing industry.

In South Africa, Al Baraka’s goal is to expand its reach and increase its share of the banking market.

“There is major potential for Islamic banking on the continent, and one of Al Baraka’s goals is to also grow its non-Muslim client base,” he says.

Conventional financial institutions such as First National Bank and Absa have dedicated Islamic banking divisions that cater for the banking needs of the Muslim community, but the product range is limited.

According to Dukander and Kassie, Africa is home to more than 500-million Muslims, yet the Islamic finance industry on the continent is underutilised and the majority of these people remain unbanked.

This is why changing perceptions and stepping up consumer awareness of Islamic banking has become a priority.

The events will take place in Johannesburg on 23 April; Cape Town on 24 April and in Durban on 25 April. Contact Saica for more information.