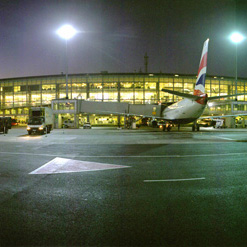 The Airports Company of South Africa is
part of a consortium that has won a
30-year contract to renovate and run
India’s Mumbai airport.

Trade between India and South Africa passed the US$5-billion mark in 2007, a mere 14 years after the resumption of diplomatic relations between the two countries. Bilateral trade is expected to reach $15-billion by 2010. Several Indian business leaders are bullish on the prospects.

Arun Nanda, an executive director of Mahindra & Mahindra, for example, addressing a South African trade delegation in Mumbai recently, extolled South Africa’s infrastructure and team spirit and underlined India’s huge requirements in several sectors, including retail and service. He stressed the importance of boosting small enterprises in both countries.

The strong commercial relationship between India and South Africa is underpinned by a number of bilateral agreements and business initiatives. In 2003 the India-Brazil-South Africa (Ibsa) agreement was signed to promote South-South cooperation and coordination on global issues.

The India-South Africa CEO Business Forum was launched in 2004 to foster trade and investment. The forum meets annually and is chaired jointly by Patrice Motsepe and Ratan Tata, who is also a member of President Thabo Mbeki’s international economic advisory council.

Bilateral trade and investment were boosted by the Indian Merchants’ Chamber’s decision to hold its prestigious India Calling conference in Johannesburg in August 2007, following previous conferences in Singapore, Dubai and London. About 300 business delegates from each country participated in the conference, which was opened by Mbeki.

The Confederation of Indian Industries has been particularly active in South Africa. In October a high-level trade delegation under the auspices of Trade & Investment SA and the International Marketing Council of SA was very well received in India.

The two vibrant economies are the spur to these initiatives. India’s 9% economic growth rate is expected to continue in the near term, and though South Africa’s growth rate is smaller, at 4.5%, it has had an unprecedented nine years’ economic growth, record foreign exchange levels, a budget surplus for the first time, and single-digit inflation.

Both countries are vibrant democracies, at comparable levels of development. Both have liberalised their foreign investment regimes, cut restrictions and simplified procedures.

The net result is that about 40 Indian companies operate in South Africa and a similar number of South African firms have set up shop in India. Among the former are Tata, Ranbaxy, UB Group, State Bank of India, ICICI and Bank of Baroda. Among the latter are SABMIller, First Rand, De Beers, Old Mutual and Sanlam.

Sasol is looking to implement its unique coal-to-liquid technology in India. Sasol’s man in India, John Sichinga, says Sasol intends investing R6-billion to R8-billion ($750-million to $1-billion) in India. The Airports Company of South Africa, together with GVK Industries (India) and Bidvest Group (Mauritius), has been awarded a 30-year contract to renovate and run Mumbai airport.

The future looks even brighter. South Africa is an attractive market to cash-flush Indian firms looking for new opportunities globally. India is a world leader in IT education and training – a South African priority. Indian IT firms are well-placed to supply software for banking, insurance, telecoms, power and healthcare, and poised to capitalise on the infrastructure requirements of the 2010 Fifa World Cup.

India’s booming economy offers South African companies opportunities in a number of sectors. Rarely a week goes by without some South African company in town looking for business. The stage is well set for bilateral trade to reach $15-billion by 2010.

Govin Reddy is country manager for India for the International Marketing Council of South Africa. This article was originally published in the Financial Mail.