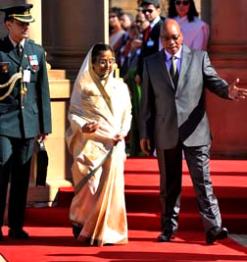 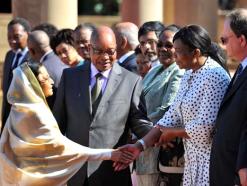 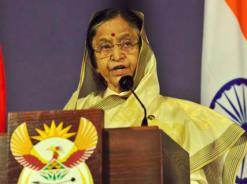 President Jacob Zuma welcomed a delegation of government and business leaders from India, led by President Pratibha Devinsingh Patil, at the Union Buildings in Pretoria on 2 May.

Patil is in South Africa following an invitation from her South African counterpart. The two heads of state will discuss bilateral relations and will also address business leaders from both countries at a forum in Pretoria on 3 May.

Patil is accompanied by a government minister, four parliamentarians, government officials from various departments, and representatives from business.

“This is a significant state visit because relations between India and South Africa date back many decades,” said Zuma.

“It is more important as it takes place during the year in which the country marks 100 years of the oldest liberation movement in Africa, the African National Congress (ANC).”

The two countries established diplomatic relations in 1993, with numerous high-level visits resulting from the relationship. Furthermore, cooperation agreements have been signed in the trade, investment, education, defence, ICT, health, agriculture, and science and technology sectors.

“Our two nations share a history of struggles against colonial oppression and racism,” Zuma said.

He added that the ANC’s centenary is important to India as well, as evidenced by the high level delegation sent from that country to the official celebrations in January.

“In our talks we reflected on how we can further translate our historical ties into meaningful socio-economic development cooperation. Progress is being made in that regard.”

The Indian delegation held private talks with their South African counterparts and then addressed the media, saying that there is a need for further cooperation in a number of areas, especially infrastructure development, training, trade relations and tourism.

Investing in and visiting South Africa

“We have once again extended an invitation to Indian business to invest in our infrastructure development programme, which will run until 2014 and is worth more than R800-billion (US$104-billion).”

Of that investment, R300-billion ($39-billion) will go towards the energy sector and R262-billion ($33-billion) towards transport and logistics projects.

The delegates identified a definite need for skills transfer with India in the areas of engineering; ICT; computer science; finance; economics and accounting.

In 2011, the number in the first nine months of the year had already surpassed, by 29%, that of the same period in 2010. As a result, India is now ranked seventh in the top 20 source markets for South African tourism.

“The Southern African Tourism Association is training more than 1 000 Indian travel agents and tour operators in India to ensure they have the skills and experience to market South Africa,” said Zuma.

“We are doing this because we want tourism from India to South Africa to increase significantly, especially after this state visit.”

Trade between the two countries

According to the Department of International Relations and Cooperation, trade between the two countries stood at R48.2-billion ($6-billion) as of November 2011, with South African exports at R21.9-billion ($2-billion) and imports from India at R26.3-billion ($3.3-billion).

The two countries have set a bilateral trade target of R111-billion ($14-billion) to be reached by 2014.

“During our discussions, I also thanked the president for India’s continued development support,” said Zuma.