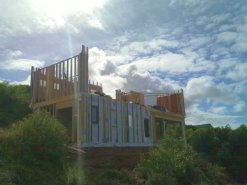 Silhouetted against the sky, the hemp
house slowly takes ahape. 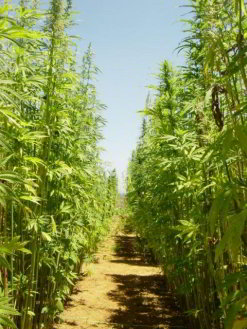 Healthy hemp plants growing on the trial
plot in Stellenbosch near Cape Town.
Hemp grown for commercial purposes is
taller than the recreational variety. 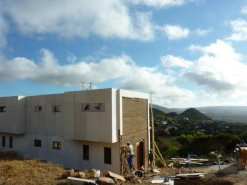 South Africa’s building industry has taken another step forward. High up on a hill overlooking the sea in Noordhoek, Western Cape, stands the House that Hemp Built.

The first of its kind in South Africa, the building was constructed almost entirely of materials that could be grown on a few hectares of land within months.

The house belongs to Tony Budden, co-owner of hemp company Hemporium, who has been exploring and showcasing the product in South Africa since founding his company in 1996. He’s been working on his remarkable home since 2005 and his idea has finally become concrete – or rather, hempcrete.

The house was conceived as a prototype for future projects in South Africa. Housing is one of the government’s most pressing challenges, and building with hemp (Cannabis sativa) could make housing projects more affordable and more sustainable.

In four months, one hectare of hemp can produce enough material for a strong and well insulated home that’s suitable for the government’s Reconstruction and Development Programme (RDP).

And after harvesting the first crop, materials for another house could be grown on the same land.

Hemp is increasingly being recognised as an ideal eco-building material, especially in Europe and Britain, where authorities are using hemp in pilot homes in their housing and eco-estates.

When Budden started the project, his major challenge was to find a local contractor who had experience in building with hemp. The solution presented itself when he was approached by green architect Erwin van der Weerd, who was pioneering a new modular building system for which he wanted to use hemp.

At his Stellenbosch factory, Van der Weerd constructed panels for the hemp house’s walls and transported them to Noordhoek, where it took a few days to assemble the house out of what looked like Lego blocks for grownups.

Modular building is much faster than the conventional process and could be effective in an RDP housing project, because all the work that requires technical expertise could be performed at a central location. Houses could be churned out at speed, and would go a long way towards reducing the current housing backlog without affecting quality and safety.

Apart from its wooden frame, the House that Hemp Built is constructed mostly from the renewable plant. As far as possible, the panels’ inside posts are made of reclaimed wood. Inside the panels are two layers of hemp insulation, and in addition to this, the walls are strengthened with hempcrete. This is a mixture of lime, water and hemp stalks, a by-product of the textile industry.

Hempcrete continues to strengthen as it gets older and harder, and the spaces between the stalks create additional insulation. The walls are plastered with hemp screed which is similar in formula but with more lime and some sand.

Some walls in the house are made from hemp chipboard, for which Budden negotiated with Chinese suppliers to develop a board that used an eco-binder instead of formaldehyde. These pioneer technologies are not cheap, and with the imported materials, the costs of the hemp house are comparable to a conventional building of the same size.

Currently, South African legislation doesn’t distinguish between tetrahydrocannabinol-containing marijuana and industrial hemp, which is cultivated for maximum fibre and minimal amounts of the psychoactive compound.

This makes it illegal to grow the plant privately in the country, but Budden has received interest and offers of support from numerous governmental and non-governmental bodies.

South Africa has been running hemp pilot projects since 1998 and the latest trials are located in the Eastern Cape. Because the country presents ideal conditions for growing excellent quality hemp, the momentum for its industrial use is increasing.

If the hemp project proves successful and large-scale cultivation goes ahead, it could change the lives of millions of South Africans. Thousands of jobs will be created in all sectors of the industry, from cultivation to beneficiation, and nutritious hemp seeds could provide poor people with essential omega oils mostly found in fish.

Economies of scale will make hemp building highly economical. It is estimated that over the next five years the global hemp industry could grow to be worth as much as R6.9-billion (US$1-billion).

When the finishing touches are completed in a few weeks’ time, Budden will move into his new house, but his mission to cultivate awareness about hemp and sustainability is far from over.

“You don’t have to change everything about your life to be green,” he said. “It’s about how you use the resources that you have. Food must be nutritious and clothing must be strong. It’s about moving away from mass consumer culture towards conscious consumer culture.”