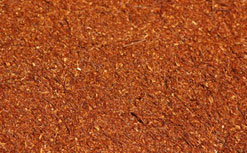 Rooibos tea is sought after all over the
world because of its distinctive taste and
its proven health benefits. 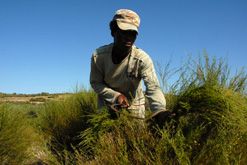 Rooibos tea being harvested by hand.

South African rooibos co-operative Heiveld, nestled in the small settlement of Nieuwoudtville on the southwestern edge of the Northern Cape province, has made it to the finals of the 2008 World Challenge for social entrepreneurs.

Heiveld was founded in 2001 by a group of 14 small-scale producers of the Suid Bokkeveld farming community, which numbers 600 in total. Today there are 50 members of the co-op. All aspects of production are handled in-house, from harvesting by hand to processing, packaging, marketing and exporting.

The region’s winter rains and acid soils are ideal for growing Aspalathus linearis or rooibos (Afrikaans, meaning red bush), which is processed into rooibos tea, one of South Africa’s most successful products, and one which is highly sought after overseas.

The Suid Bokkeveld is wedged between two important biomes – the Succulent Karoo and the Cape Floral Kingdom. Each biome is home to a wide range of drought-tolerant plants. The Cape Floral Kingdom, the smallest and richest of the six world floral kingdoms, supports a unique group of plants known as fynbos (named so because of the plants’ finely textured leaves). The diversity of fynbos plants is greater than that found in all the tropical rainforests, with 1 300 distinct plant species per 10 000 km². Conservation of the Cape Floral Kingdom is a national priority.

Heiveld produces organically grown rooibos tea for the fair trade market, as well as a range of packaged products for the South African market. No chemicals are used in cultivation, and most harvesting and processing is done by hand. All packaged products are enclosed in cotton bags that are made by groups of women on farms in the area, using hand-operated sewing machines. The rest of the packaging process is handled by the community.

Rooibos tea is harvested in a sustainable manner to preserve the bushes. The shrubs are topped on an annual basis, and then allowed to grow and flower before being harvested again. This technique is so effective that some plants remain viable for more than 50 years.

Heiveld rooibos tea is exported directly to clients in the fair trade or alternative trade movement in Europe, the US and Canada. Members of the co-op are all certified by Fair Trade Labelling Organisations International, a non-profit association comprising 23 member organisations that develops, reviews and upholds fair trade standards.

The co-op ploughs 30% of its profit back into the community, for empowerment projects that target women and disadvantaged individuals. It is also implementing an erosion control and climate change adaptation programme in the area.

New Zealand-based Trade Aid website reports that during the 2005/06 season, Heiveld farmers produced 36 tons of organic rooibos, achieving a financial turnover of R 1.5-million. Participating farmers took 70% of the profits, in proportion to their contribution, and the remaining 30% went to the community. The community has also invested over R200 000 of its profits, says Trade Aid, into a tea-processing facility.

In 2000 the Heiveld co-op was a participant in a community-to-community knowledge exchange programme, overseen by the NGO Environmental Monitoring Group. The NGO organised visits for members to other community projects in the region, resulting in an active learning process that enabled farmers to gain management and organisational skills. This led to the formal establishment of the co-op.

The initiative later attracted the attention of the World Bank, which used Heiveld as an example in its community knowledge exchange training manuals.

A. linearis is a species of fynbos, as is honeybush (Cyclopia intermedia), another indigenous plant species of economic importance that can also be brewed into a soothing tea. Both species are members of the legume family.

The rooibos plant, which can grow up to a metre in height, is used in the production of the popular tisane or herbal tea that was widely used by the Khoisan people of the region to treat a variety of ailments. Nowadays millions of South African children grow up on the caffeine-free, low-tannin rooibos tea, especially those who are lactose-intolerant or who suffer from colic.

In the summer months the needle-like leaves of the rooibos bush change from green to a rich, red colour – this is the stage at which they are harvested. The leaves are oxidised to further develop the colour and enhance the flavour. Green rooibos, which is not oxidised, is also produced but is more expensive than traditional rooibos because of the specialised production process.

The tea can be drunk with milk and sugar, or without. Coffee shops in South Africa now also offer red espresso, which is concentrated rooibos tea served espresso-style.

Rooibos was the subject of a controversial dispute in 1994, when US firm Burke International registered the word “rooibos” as its trademark. As the plant grew in popularity, Burke attempted to force companies to pay for using the name, or to not use it at all. The company clung to the trademark for a decade while South African rooibos distributors, the South African government and US-based importers challenged the move, saying that the generic name of a type of tea could not be trademarked.

Finally, ongoing lawsuits and petitions by the American Herbal Products Association and others caused Burke to “voluntarily surrender” its rights to the trademark in 2005.

In 2005 Medical Research Council researcher Dr Jeanine Marnewick conducted studies into the beneficial properties of rooibos and honeybush. She found that both varieties offered protection against mutagenesis, one of the first steps in the potential onset of cancer. The teas’ potent anti-oxidant properties protect consumers against free radicals by neutralising the harmful molecules, as well as increasing the level of natural anti-oxidants in the liver.

Established in 2004, the World Challenge is a global competition organised by the BBC and Newsweek in association with Shell. It rewards community-based projects and small businesses that make a difference using innovative and enterprising strategies. There are six categories: Community Welfare and Enterprise; Health and Education; Sustainable Farming; Energy; Water; and Environment.

Entries were carefully examined by a panel comprising professionals from a variety of backgrounds, and headed by renowned economist and strategic consultant Richard O’Brien.

The panel pared down the bulk of the entries to a shortlist of 60, which was then further cut down to 12 finalists. Criteria for selection to the final group included demonstration of an entrepreneurial spirit working for the benefit of the community while adopting a responsible approach to the environment, as well as innovative use of technology.

Voting for the top spot opens on 1 October 2008 and closes on 21 November 2008. Other finalists are located in developing countries around the world, including Brazil, Pakistan, India, Nepal, Paraguay, Columbia and Kyrgyzstan. The only other African country to produce a finalist is Kenya.