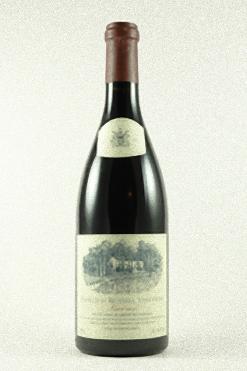 The 2007 Hamilton Russel Pinot noir
is rated by Wine Spectator as one of
the world’s 100 best wines.
(Image: Wine.co.za)

Hamilton Russell Vineyard’s 2007 Pinot noir has made the Wine Spectator list of the year’s top 100 wines. The list is based on all the wines the New York-based magazine has reviewed over the past 12 months.

Thirteen countries were represented on this year’s list, among them the single South African representative.

The estate’s owner Anthony Hamilton Russell said: “We were extremely proud of the inclusion this year of the Hamilton Russell Vineyards 2007 Pinot noir on the 2009 Wine Spectator Top 100 Wines of the year.”

He added that the product was one of only seven Pinot noirs in the Top 100.

With an alcohol content of 13.6%, the 2007 Pinot noir lay for 10 months in French oak barrels before bottling. Also in 2009 it won a bronze medal at the annual Decanter World Wine Awards.

Only the most exhilarating wines make it to Wine Spectator’s top 100 list, which was first published in 1998 and claims to recognise exceptional producers, focus on successful wine-producing regions, and tap into significant new trends.

Wine Spectator reviewed over 17 000 wines during 2009 and of these, more than 3 800 products received outstanding ratings, scoring 90 points or more on the magazine’s 100-point rating scale.

The magazine uses the blind-taste technique. Wines are presented in a bag, with only a code for identification. Experienced lead tasters are assigned to a particular region, or beat, so as to continually gain knowledge of the range and quality of their specific region.

The 3 800-plus outstanding wines of 2009 were further narrowed down, based on four criteria, namely quality, value, availability and a certain mysterious ingredient that the judges would only describe as “excitement”.

The value of the product was determined by its retail price, quality was reflected in its score, and availability was defined by the number of cases produced or imported.

With the world tightening its collective belt during the financial crisis of 2009, the judges were very critical of value. Once the list of 100 was finalised, it was found that the average bottle price, at US$40 (R300), was $2 (R15) cheaper than last year.

The average score for quality was an impressive 93, the same as the previous three years.

Hamilton Russell Vineyards, the southernmost wine estate in South Africa and the first to be planted in this area, is located near the sleepy seaside town of Hermanus on the southern Cape coast overlooking Walker Bay.

Cooled by the icy Benguela current, the warm summers and mild winters of the Walker Bay region offer an ideal climate for the cultivation of Pinot noirs and Chardonnays. In 1975 former advertising executive Tim Hamilton Russell bought an undeveloped 170ha property just 3km from the Atlantic Ocean, and in the decades since has developed it into one of the country’s most celebrated wineries.

Hamilton Russell specialises in Pinot noir and Chardonnay, with 22ha of the former and 30ha of the latter lying in areas that were tested for suitability before planting.

The estate is not only making a name for itself as a producer of fine wines, but also as a champion for wildlife conservation and fynbos preservation. In 1994 a 38ha reserve was set aside to safeguard the indigenous Kogelberg Sandstone fynbos. The removal of alien vegetation allowed the reserve to thrive. In total 52ha, including wetland, are under conservation.

Pinot noir, a red grape variety of the species Vitis vinifera, is the principal black grape in France’s Champagne and Burgundy grape-growing regions, but it is also grown successfully around the world in countries such as South Africa, New Zealand, Switzerland, Germany, the US, Italy and Canada. It thrives in cooler regions.

The grape cluster resembles a pine cone, hence the varietal name, which is derived from the French words for “pine” and “black”.