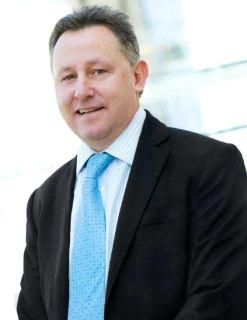 Nedbank’s Mike Peo says all the capital raised through the Green Savings Bond will be set aside for investment into renewable energy projects financed by Nedbank Capital.
(Image: Nedbank) 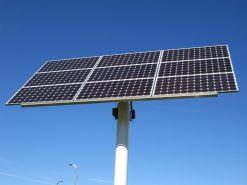 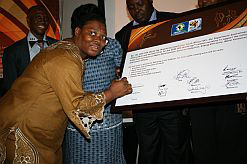 Investment into renewable energy in South Africa is growing, and this shows that the sector has economic growth potential.
(Image: nationalwind.wordpress.com)

Nedbank has developed a new investment product for green-minded South Africans who want to take responsibility for their financial security, but also make a contribution towards protecting the environment.

The dual-purpose Green Savings Bond, a first for the country, encourages people to save more, and at the same time participate in funding renewable energy products in the country.

Anton de Wet, managing executive of client engagement at Nedbank, says with the Green Savings Bond the bank hopes to change how people think about saving and make it easy for more people to invest in a product they can understand.

According to the South African Savings Institute many households in the country have very little to save, and battle to manage their finances.

The World Economic Forum 2011/12 Global Competitiveness Report ranks South Africa 72nd in the world for its gross national savings rate, equivalent to 20% of GDP. This is well behind Brics countries such as China, ranked second with savings equal to 54% of its GDP, India in 15th position with 34.7%, and Russia ranking 44th with 24.7%.

“The Green Savings Bond broadens the appeal of savings to all South Africans,” de Wet says.

There is nothing highbrow about the Green Savings bond. It requires a minimum investment of only R1 000 (US$122), and offers an interest rate of up to 7.50% per annum. The interest rate is fixed and varies according to the investment term. No fees or commissions are levied to the client.

Investors can decide when they want to access their funds, at 18 months, two, three or five years. There is also the option of having interest paid out monthly, quarterly, half yearly, annually or on expiry of the investment.

Although clients cannot add more money to the initial investment amount, there is no limit to how many Green Savings Bonds a single investor can hold.

What makes it green?

Mike Peo, head of infrastructure, energy and telecoms at Nedbank Capital, explains that all the capital raised through the Green Savings Bond will be set aside for investment into renewable energy projects financed by Nedbank Capital.

He explained that all risk associated with investing in such projects will be carried by Nedbank.

The initiative is building the country’s renewable energy sector and introducing independent power providers as a supplement to traditional forms of energy supply.

Peo says that investment into renewable energy in South Africa is growing, and this shows that the sector has economic growth potential.

“We are seeing growth in the establishment of renewable energy capacity,” he says, “As these come online, they will give rise to numerous upstream and downstream production, manufacturing and service opportunities.”

Peo is also positive about the long-term economic and social development potential of the renewable energy programme.

“Unlike almost all of South Africa’s previous infrastructure development projects, the development of the country’s renewable energy industry is not a finite project,” he says. “It need not have an end date and we expect further announcements from the Department of Energy in this regard.”

He believes that South Africa can become a renewable energy hub for the African continent.

Although the country’s first priority is to establish a viable renewable energy sector, there is nothing stopping South Africa from expanding its reach to the rest of the continent.

“Stakeholders in this fledgling sector should never lose sight of the fact that what we do here in South Africa could ultimately be of great benefit to the whole of Africa,” he says.

Nedbank’s move to introduce the forward-thinking investment product is in line with World Bank initiatives to find innovative ways to deal with climate change through mitigation and adaptation projects.

Similar to the Nedbank model, the World Bank introduced a Green Bond to raise funds from fixed income investors to support its lending to projects that mitigate climate change, or help affected people adapt to it.

Since 2008, the World Bank has raised more than R24.6-billion ($3-billion) in Green Bonds, proving just how successful such an investment product can be.

Some of the projects that have received funding from its Green Bonds include solar and wind installations, greater efficiency in transportation, fuel switching and mass transport, waste management, construction of energy efficient buildings, carbon reduction through reforestation and food security improvement. 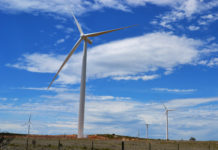 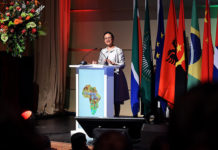 SAIREC: the importance of renewable energy 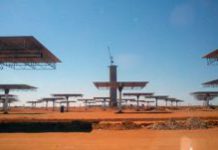