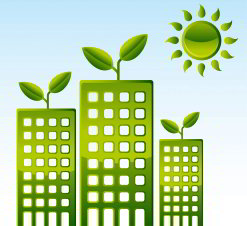 Many people spend the bulk of their
time at the office, so it is logical to
adapt work behaviour to reflect a
more sustainable approach.
(Image: Architects Modern)

Materialism and consumerism are two traits that have led to the degradation of the ecosystem and they must be replaced with thoughtful purchasing, say the organisers of South Africa’s Green Office Week (Gow), an annual initiative that promotes responsibility towards the environment.

Now in its third year, Gow will be marked from 16 to 20 April with the theme You can make a difference.

The initiative is celebrated in the same week as Earth Day, on 22 April.

Gow’s organisers believe that whether an organisation is large or small, green behaviour must be a part of the work habits of everyone employed there.

Gow spokesperson Ana-Maria Valente says the aim of the campaign is to encourage employees to consider ways of reducing waste and reusing more material in their offices.

“We know that time is limited for most working people so the obvious thing to do is to make green office behaviours as easy as possible by providing samples of action plans that cover the key areas where everybody – from the tea lady to the executives – can start going green,” she says.

Some of the tips that can be found on the Gow website include using greyscale printing for in-house documents and taking out all unnecessary goods from car boots in order to save fuel.

The idea of holding a green office week in South Africa was spawned when Valente came across the British version of Gow. She contacted the organisation and obtained permission to adapt the principles for use in this country.

The sustainability of businesses, nations and the earth are all connected, says Valente. As a result, the global economy is adopting principles of environmental maintenance that may offer solutions to climate change and the global financial crisis.

“We tend to think that everything from water to food is infinite,” she says. “We are urging people to start thinking green because it is tied to financial sustainability.”

The general perception is that corporations care more for their bottom line and pay the planet scant attention. Although there are numerous big companies, such as Nedbank, who are conscious of their carbon footprint and have implemented many strategies to offset it, Valente says there are three ways to coax more of these companies into being considerate towards the environment.

The first is legislation that would punish them for misdemeanours against the ecosystem.

Another method is to show them that they can actually measure the amount they save if they stop wastage of electricity, paper, fuel and the like.

The final way is to implement a reward system. Gow is using this last technique as a way to get employees to start thinking green.

For this year’s initiative Gow has introduced the Green Heart Award, which is given to individuals who have made considerable eco-friendly changes within the office environment.

“We want to go into firms and find the eco-champions. The minute you start finding eco-champions you grow more of them,” says Valente.

The reward is an attractive cash prize for both the winner and the person who sent in the nomination. There is also a host of other sponsored prizes.

Gow is creating a marketing strategy that will see celebrities promoting the campaign as well as the use of media to spread the organisation’s message.

“We want to use every possible psychological tool,” says Valente.

Employees need to know about Gow

Some employees, however, know nothing about Green Office Week. Keveshen Chetty, an ICT practitioner at Asgisa Eastern Cape, said that he was not aware of the initiative.

Chetty acknowledged that more needs to be done to make offices more eco-friendly.

“A formal awareness strategy should be developed and staff made aware of it,” he said.

Jaen-Pierre Klaassen, CEO of web development company MyGuru, has also not heard of Gow. However, he said his organisation has a number of green habits.

MyGuru’s billing system is fully digital; the company has only one laser jet printer and it rarely buys paper. The servers are driven by wind farms and power supplies are switched off at the end of each day.

“It is just a way of thinking. We are a generation that has these habits ingrained in us,” said Klaassen.

MyGuru also offers an email service called Clickmail, which encourages clients to send e-newsletters and conduct campaigns online. For every client that signs up, MyGuru donates money to an organisation that will plant a tree.