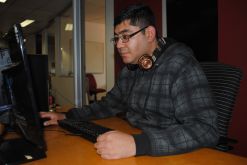 Just 41% of South Africa’s population uses the internet, but 60% of Africa’s internet traffic is driven by South African business.

Almost 14-million South Africans now regularly access the internet at work, through home broadband connections or on their phones; this is more than 2-million users over last year and accounts for 39% of the adult population.

These were the key findings of a recent study conducted by the Digital Media and Marketing Association (DMMA) and Echo Consultancy. Tracked through All Media Products Survey (AMPS) figures and verified by DMMA’s official Effective Measure (EM), the number shows a larger number of internet users than previously thought.

Jared Cinman, chair of the DMMA, says, “A greater percentage of South Africans are consuming media online than previously reported. This has direct implications for the media mix that marketers purchase.”

One event – the 2010 Fifa World Cup – sped up internet access in South Africa. In 2008 Africa had just three fibre optic internet links. By the time the whistle was blown for the first game two more cables had been laid. South Africa has the fifth-highest internet penetration in Africa; oil-rich Nigeria has the highest internet penetration with 29% of the population with access, followed by Egypt, Morocco and Kenya.

When the first co.za domain name was registered in 1992 there were just over a million computers, worldwide, connected to the web and the ability to transmit audio and video files was a novelty. Today just over 20-million South Africans alone have access at work, in school or at internet cafés.

Since 2000 smartphone use in Africa has grown an average of 43% annually. Experts predict that by next year 69% of Africa’s 1-billion people will be using their phones for everything from banking to accessing social media to monitoring health and education. In 2012 there were an estimated 450-million handsets in Africa; of that number 7,9-million South Africans used their phones or tablets to access the internet. It is these users who are driving the growth of internet use in South Africa.

South Africa is ranked 62 in the world for mobile broadband connections, with 26 out of every 100 people connecting using mobile devices. By the end of 2013 there will be three times as many mobile as fixed connections in the country if the annual growth of 30% in subscriptions remains the same.

A cultural and economic window

Expanding internet connectivity can stimulate economic activity and improve the educational experience by improving access to culturally diverse content. This is according to United Nations Educational, Scientific and Cultural Organisation (Unesco) Director General Irina Bokova, speaking at the launch of the State of Broadband 2013 report in September. “It can widen access to learning, enhance its quality and empower men and women, girls and boys, with new skills and opportunities. But this does not happen by itself – it requires leadership, planning and action.”

World Bank figures show that for every 10% increase in mobile penetration, there is a corresponding 0,8% increase in GDP. In 2012, according to a World Wide Worx study, the internet generated R58,9-billion in sales in South Africa. This equates to 2% of the country’s GDP despite there being a massive digital and connectivity gap. By 2012 despite a network that, like South Africa’s, served cities rather than rural areas, India created 10-million jobs, thanks to the internet.

Mark Shuttleworth, a South African internet pioneer, has been a strong proponent of FOSS software and through his Shuttleworth Foundation, has funded programmes to roll out FOSS to areas where broadband connectivity is either non-existent or expensive. Along with for-profit company Breadbin, the foundation has set up kiosks to download business software and templates for business plans. Originally devised as a tool for entrepreneurs the system has now been adopted by provincial and national government departments.

The Western Cape Department of Education’s e-learning Toaster was developed for principals, teachers and students to access information and programmes; the kiosk provides access to past exam papers, science simulations to aid in lessons and other related educational materials.

The South African Department of Health has embraced internet connectivity and smartphones to improve the state of healthcare, especially in the public sector, with its adoption of the eHealth Strategy 2012. The plan envisions the use of information and communication technology to treat and track patients, track disease and monitor public health, educate students and pursue research.

A major departmental initiative is the mHealth programme. Using the telecom and mobile infrastructure the department hopes to improve its interaction with patients by providing information (related to disease prevention and promoting a healthy lifestyle), informing them of test results and encouraging them to follow HIV and TB (tuberculosis) treatment protocols.

As the world becomes more connected it has become more important for South Africa to improve access for its population. Internet connectivity will make the difference between people joining the rest of the world or lagging even further behind. In the words of Shuttleworth, “The computer is not a device anymore. It is an extension of your mind and your gateway to other people.”