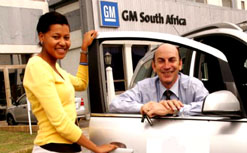 General Motors South Africa is confident
that it is business as usual despite its
parent company filing for bankruptcy.
(Image: Metromedia SA)

General Motors South Africa (GMSA) has assured its customers and employees that it is not affected by the bankruptcy filing of its parent company in the United States.

On 1 June General Motors (GM) officially declared bankruptcy, making it the largest bankruptcy filing in the history of US auto manufacturing.

GMSA’s managing director Steve Koch says the South African company is completely independent and will not be negatively affected by the parent company’s financial downfall.

“GM South Africa is not part of this filing in the US and will not be affected by the measures announced,” said Koch in a statement. “Creditors of GM in the US would have no claims on GMSA as we have not guaranteed any US obligations nor are any of our assets [being] used as security for their obligations.”

According to Koch, GMSA has been anticipating the bankruptcy since early 2008, and subsequently took the necessary steps. “We have successfully stabilised our cash balance, reduced inventory levels and [we] continue to make progress reducing our structural costs, all directed at ensuring profitable growth in South Africa.”

Koch announced that not only is GMSA doing well financially, but that it is going ahead with plans to expand its business.

In addition, the company recently welcomed its first shipment of the Chevrolet Cruze, which is due for validation testing before hitting the South African market.

The company expects to increase investment in its South African operations, with plans for the production facilities in Port Elizabeth, in the Eastern Cape province, still on track.

GMSA currently sells Chevrolet, Isuzu, Opel, Hummer, Saab and Cadilac in South Africa and has been operational in the country since 1926.

The company has had some successes with its Opel Corsa Utility bakkie (pickup truck), which has been the top selling utility vehicle in its size category for the past four years.

General Motors Australia and Thailand have also revealed that they are financially stable and that no job losses or company closures are in sight as a result of the parent company’s business woes.

Obama to the rescue

US president Barack Obama’s administration is now set to provide the car manufacturer with a $30-billion (R242-billion) bail out plan to restructure the company.

Speaking on the bankruptcy filing, Obama expressed his confidence in the group’s ability to turn itself around, “Our goal is to get GM back on its feet, take a hands off approach and get out quickly.”

The US government is now a controlling shareholder of the auto group. GM has also been de-listed from the New York Stock Exchange.

Speaking to news agency Reuters, automotive historian Bob Elton says GM’s bankruptcy has been a long time coming. “This is proof GM has failed. They have been failing for years but have covered it up. Now they’ve come to the end of the line.”

In an attempt to resuscitate its financial position, GM will divide the company in two.

The “new GM” will consist of the core essential parts of the business that will be kept for restructuring. The “old GM” will include the company’s excess plants and equipment, which will be liquidated.

In its court files, GM stated that it was important to restructure the company as soon as possible in order to save some of its assets.

“The vicious cycle of frozen credit markets, growing supplier uncertainty and lack of consumer confidence has the potential to unravel the automotive industry and short-circuit the creation of new GM,” said GM chief executive Fritz Henderson in court documents.

For the next 30 days, GM will embark on a vigorous move to sell off its strongest assets. Italian auto manufacturer, Fiat Spa, has bought GM’s Chrysler assets.

Under its bankruptcy terms, GM has been allowed to use up to $15-billion (R121-billion) of the credit facility from government to deal with its liquidation requirements. This includes paying out employee wages, healthcare benefits, supplier payments as well as other operating expenses.