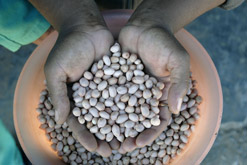 South Africa’s adoption of genetically modified (GM) crops continues to expand at an impressive rate. According to Dr Kobus Laubscher, CEO of Grain SA, this is an important development for sustainable food production in South Africa.

The challenge for agricultural production is to keep up with population growth and demand.

“We have to produce more food, and applying the technology means that we can increase production on fewer hectares of land available,” Laubscher said.

A survey funded by the Maize Trust indicated that in 2008 GM maize plantings in South Africa increased by 10 000 hectares, even with an almost 8% decline in commercial maize area planted.  Soya beans increased by 40 000 hectares and cotton by 2 000 hectares.

Laubscher also pointed out that farmers have adopted the technology for profit as well as improved production. A Maize Trust study found that 15-million tons of GM maize was produced on 4.2-million hectares from 2000 to 2008. Calculated at an average yield increase benefit of 10.6% and using average annual grain prices over the period, maize farmers gained an additional income of R2-billion.

Although there is a certain amount of resistance to GM products, the benefits outweigh the perceived disadvantages. Laubscher said every year 40-million South Africans, in one way or another, consume GM food without a single medical or scientifically-substantiated adverse effect on humans, animals or the environment.

There are in fact a number of proven environmental and health benefits. According to a report released by the International Service for the Acquisition of Agri-Biotech Applications, biotech crops also resulted in reducing pesticide use by 359 000 tons of active ingredient.