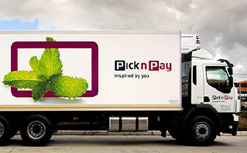 The award, presented at the NRF’s Annual Convention and Expo in New York on Tuesday, goes to “an individual who has achieved international recognition for excellence”, selected by global industry leaders.

“Retailers who succeed in carving out a place for themselves in a world where there is so much competition should be commended,” said NRF president and CEO Tracy Mullin. “Great leaders create great companies”.

“The NRF wrote to us last year saying we had been selected,” Badminton told The Times. “It came out of the blue, but it is nice to be recognised internationally.

“This award is an acknowledgement of an incredibly supportive board, management team and thousands of exceptional employees.

“Pick n Pay is making a difference to building black business ownership by converting to black-owned stores. In a few years this will go down as one of the big things we have done in South Africa.”

Badminton began his career at Pick n Pay as a trainee manager in 1979, becoming an assistant manager in the same year. He soon started to scale the corporate ladder, going from store manager to regional manager to buyer.

In 1994 he was appointed general manager of the Western Cape, and in 1997 received the Chairman’s Award – the highest accolade for an individual at Pick n Pay. He was appointed to the Retail Management Board in 1998 and became managing director of Pick ‘n Pay Retail in May 2001. He was made chief executive designate in August 2006 and took over as chief executive in March 2007.

Pick n Pay is a family-controlled business established in 1967 and listed on the JSE stock exchange in 1968.

The Group operates through three divisions, the Retail Division, the Group Enterprises Division and Franklins Australia, each with their own managing director and management boards.

Meanwhile, South Africa’s other major retail group Shoprite said yesterday that its turnover grew 27.3% to R29.6-billion for the six months to last month with the group’s African business continuing to forge ahead. Turnover growth on a like-for-like basis increased by 22%.

The group said the main contributing factor was the fact that most currencies strengthened against the rand.

Absa Asset Management Private Clients analyst Chris Gilmour told Business Report Shoprite’s turnover growth was “outstanding” and highlighted how astute the company was in gaining first-mover advantage in the rest of Africa over a decade ago.

“This has helped to diversify the group’s business at a time when consumer spending in SA has come under severe pressure,” Gilmour said.