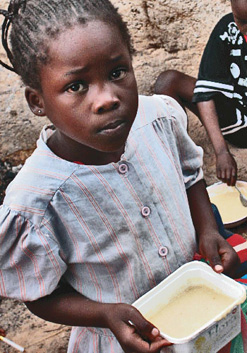 Statistics released by the World Bank
indicate that food prices have
increased by a staggering 83%
(Image: World Food Programme)

World leaders, starting to feel the pressure from disgruntled poor people, are taking the global increase in food prices and its effects seriously.

On 22 April the World Food Program (WFP) hosted a summit on the food crisis in London. Josette Sheeren, the WFP’s executive director, warned that a “silent tsunami” of hunger is sweeping the world’s most desperate nations. She noted that the price of rice has more than doubled in the past five weeks and that China and India are currently facing an increased demand for their produce.

British Prime Minister Gordon Brown, who co-hosted the talks with Sheeren, said the spiralling prices threaten to plunge millions back into poverty and reverse progress on alleviating poverty in the developing world. “Tackling hunger is a moral challenge to each of us and it is also a threat to the political and economic stability of nations,” Brown said.

In New York, United Nations Secretary-General Ban Ki-moon has also voiced his concern over the increase in food prices, calling for both immediate and long-term measures to tackle the crisis. “We need not only short-term emergency measures to meet urgent critical needs and avert starvation in many regions across the world, but also a significant increase in long-term productivity in food grain production,” he said.

Scale of the problem

The organisation says high food prices are threatening recent gains in overcoming poverty and malnutrition, and are likely to persist over the medium-term. “Poor people are suffering daily from the impact of high food prices, especially in urban areas and in low-income countries,” said World Bank Group president Robert Zoellick.

According to a World Bank policy document entitled Rising Food Prices: Policy Options and World Bank Response, increases in global wheat prices reached 181% over the 36 months leading up to February 2008, and overall global food prices increased by 83%. Food crop prices are expected to remain high in 2008 and 2009.

The International Monetary Fund (IMF) is also concerned. Head of the IMF Dominique Strauss-Kahn recently told French radio that soaring world food prices could have dire consequences, such as toppling governments and even triggering wars. The IMF chief says the problem could also threaten democracies, even in countries where governments have done all they can to help the low-income earning population.

South Africa has not gone untouched by the food crisis. Trade union federation Cosatu recently held a march in Johannesburg to protest against soaring food prices. They called on government to find a lasting solution to the problem.

The government and the agricultural industry have also been in discussions to find ways to curb food-price inflation, which in recent months has seen the price of basic foodstuffs increase by 14% in South Africa.

Government spokesperson Themba Maseko says the government is developing a strategy to address this challenge. He said the government is confident that the competition authorities, who regulate food prices in different industries, will continue to be vigilant and take strong action to curb negative practices that had also contributed to higher food prices.

A researcher from the Institute for Security Studies, David Zounmenou, recently told the Mail & Guardian newspaper that in African countries where unemployment rates are high and social delivery low, an increase in food prices will certainly continue pushing people over the edge. “High food prices can only add fuel to this [unrest] and can be exploited by the opposition or other interest groups to create instability.”

Other areas of Africa where violence has flared due to high food prices include Cameroon, Burkina Faso, Côte d’Ivoire and Senegal.