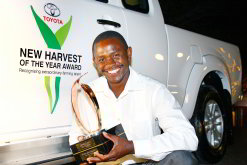 This year’s New Harvest Farmer of the
Year is Gift Mafuleke, who developed his
passion for farming while still a child.
(Image: Toyota SA)

Gift Mafuleka, a young emerging black farmer from the Bronkhorstpruit area, located about 50km east of Pretoria, has been chosen as the 2011 Toyota New Harvest Farmer of the Year.

Mafuleka, an official supplier to the local operation of McCain Foods, triumphed over eight other finalists from around the country for the coveted title, driving off with a brand new Toyota Hilux 3.0 Raider into the bargain.

Toyota South Africa decided four years ago to put its weight behind emerging black farmers, and introduced the competition. It recognises the most promising among these farmers, noting that the majority of them have to overcome tremendous obstacles to succeed in a tough agricultural environment.

The competition is only open to previously disadvantaged farmers who have at least five years experience in farming. Candidates must be nominated by an organisation that was involved in their development.

“The objective of Toyota SA is specifically to reward a black emerging farmer by means of public recognition, thus highlighting that there are not only failures but also successes in the upcoming farmer sector in SA,” says Professor Carlu van der Westhuizen, technical adviser and convener of the judging panel.

Van der Westhuizen adds that there is no doubt that these finalists and winners are commercial farmers in their own right, with some showing the potential to become “very good farmers” who will eventually be able to compete on national level in the open farming categories.

“In the coming few years I expect Gift Mafuleka to be a strong contender for the Toyota/Agri SA Young Farmer of the Year title, irrespective of his background.”

The two competitions run concurrently but the latter offers much stiffer competition as it is open to young farmers from all backgrounds.

Thirty year old Mafuleka uses the 340 ha of land leased from the government for mixed farming operations. He currently supplies McCain Foods with 250 tons of sweet corn and 115 tons of peas, but says he hopes to double his production by 2015.

He also plants maize and soya and plans to venture into beef farming in the near future.

Mafuleka was nominated by the Gauteng Department of Agriculture and Rural Development.

He says his passion for farming sprouted when he was growing up in Empangeni, KwaZulu-Natal, under the watchful eye of his grandparents, who were subsistence farmers. He says he used to love taking care of the animals and enjoyed his grandfather’s activities of planting sugarcane and vegetables in the garden.

Today he holds a BTech diploma from Tshwane University of Technology, specialising in crop production. In 2006 he joined the graduate training programme of McCain Foods, working at the research unit in Bronkhorstpruit, where he excelled.

But he made it clear to McCain Foods that he wanted to do his own farming. “I told them I am a bona fide commercial farmer and that I would like to farm on my own.”

In 2009 McCain Foods closed the research facility and Mafuleka saw his chance. Following the sale of the land to the government, he entered into a lease agreement with the state and has never looked back.

He says one of the toughest challenges for emerging black farmers is that they are not recognised as genuine farmers, or taken seriously enough by the larger agricultural community.
“The industry is very big and it is difficult to break through, to be known and taken seriously.”

He ascribes his success to a balanced approach to the job. “I work hard but I also take time off. I reward myself and I rest regularly,” he says.

For Mafuleka, recognition through this competition is without price. “It means a lot to me. It makes me realise that hard work really pays off.”

In South Africa there are roughly 2.5-million upcoming farmers, operating under various circumstances: from commercial and communal farmers, to farmers on tribal land, and those simply practising subsistence and backyard farming activities.

“Farming is a very challenging profession and farmers have to manage a multitude of business areas. To run a successful farm is a big challenge and we would like to recognise and salute farmers like Gift who had overcome even more challenges than most farmers,” says Marius Burger, senior VP of Toyota SA’s corporate administration.

It is true that emerging farmers have greater challenges to overcome, says Van der Westhuizen.

“Many black farmers did not receive the same opportunities than their white counterparts. In most cases they are more restricted in terms of available resources, education, information sources and other aspects.”

One of the bigger challenges faced by these farmers is the lack of access to production credit, mostly because they don’t have collateral to offer as security. They also lack a deeper scientific and economical knowledge and are often out of reach of available information sources, says van der Westhuizen.

“Yet, all the farmers that I talked with want to become bigger commercial farmers with proper agricultural machinery and implements, and better quality animals.”

Moses Gumede, a sugarcane farmer from Eshowe in KwaZulu-Natal was the winner of the New Harvest competition in 2010. He produces more than 895 tons of sucrose annually.

With the issue of food security gaining greater importance worldwide, South Africa’s government has noted with concern that the number of commercial farmers in the country has dropped from 45 000 to 32 000.

Minister of Rural Development and Land Reform, Gugile Nkwinti, says it has become imperative that emerging farmers become productive, and remain so. The government will require commercial farmers to play a vital role in this regard.

Nkwinti was speaking at an agricultural gathering in Gauteng in October where he highlighted the main aspects of the new Green Paper on Land Reform to the community.

“State support to farmers will be conditional on their commitment and passion to farm, as well as land being used for production,” he said.

While the new Green Paper on Land Reform, released in September 2011, will strive undo the legacy of apartheid’s unequal land distribution, Ngwinti says the document will place greater emphasis will be placed on food security, job creation, and skills training among beneficiaries and black farmers.

Van der Westhuizen says the Department of Rural Development and Land Reform is on the right track with their current mentoring programme, but that more research should be done in respect of the aptitude for farming of future land reform beneficiaries. He is researching this aspect at the moment.

“Statistics on land reform vary according to the source, but it is common knowledge that there are failures and also successes, as proved by the Toyota New Harvest competition,” he said.

The Department of Rural Development and Land Reform’s mentoring programme can be contacted on +27 12 312 8911.