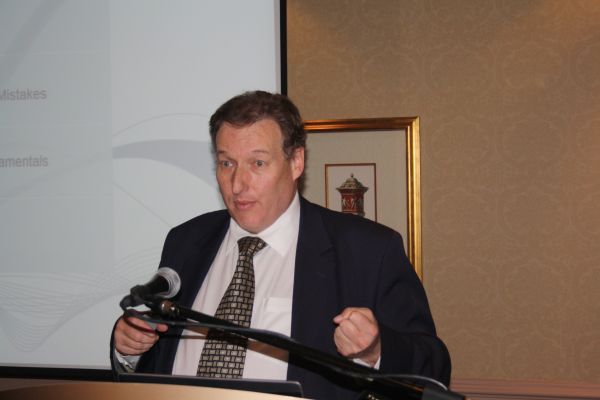 Chief economist Chris Hart said South Africa had not had a great start to the year: the price of petrol had gone up, the rand had declined, interest rates were up, trade unions with political ambitions were fighting employers and not working together with them to find solutions. All of these factors were not good for investors. (Image: Ray Maota)

South Africa and Sweden have long-standing political and development connections, and linking up to find ways to monitor South Africa’s export competitiveness is the latest venture in the nations’ partnership.

Brand South Africa, custodian of South Africa’s image, and Business Sweden discussed designing an export competitive index for South Africa at a networking session held at The Michelangelo in Sandton on 10 February.

At the inaugural Brand South Africa Competitiveness Forum held in 2013, it was established that a Country Performance Tracking Index was needed to enable South Africa to track and respond to key challenges within its economy and society. At the networking meeting this week, economists Mauro Gozzo from Sweden and Chris Hart from South Africa spoke about the state of exports in their respective countries, and how to improve the sector.

Dr Petrus de Kock, the research manager at Brand South Africa, also spoke about how Brand South Africa tried to aid South African exports. Olov Hemstrom, the Swedish trade minister, said: “We from Business Sweden are working a lot to help the export development in South Africa. We have an industrial school in Temba and are working closely with the Department of Trade and Industry as well as Seta.” 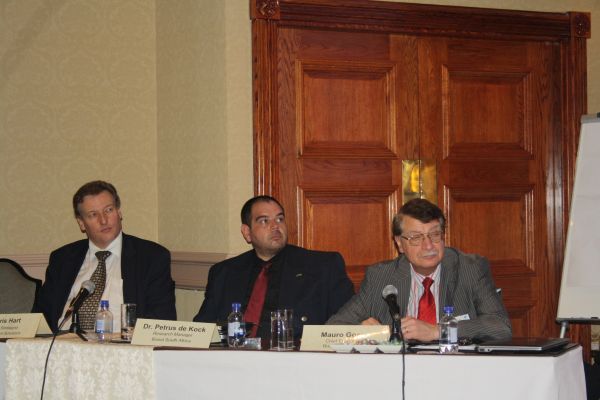 Sweden’s economy is faring better than that of many of its peers: the nation has low public debt and a current account surplus, and since the early 1990s its growth rate has outpaced that of other members of the European Union-15 and the United States, according to the McKinsey Report, produced by the global management consultancy firm. The firm works with its clients to apply its understanding of market and industry forces to develop long-term macroeconomic perspectives.

“Sweden has an export driven economy as 50% of our gross domestic product comes from exports. And of this 50%, about 20 % comes from just three companies,” said Gozzo. He also said that Sweden’s economy had been rising better than that of North America.

“If you have a lot of cyclical exports, your economy will be hard hit at bad times, just like Sweden was in 2009. Our recovery was quick though and by 2011 we were back to normal.” Gozzo said that consumer credit was important in emerging markets.

Sweden’s economic growth mainly reflects productivity gains in the areas most exposed to international competition: manufacturing, and business and financial services, which together account for only about one-third of the nation’s economy. In its two other main components – the public sector and local services – economic growth has been much slower, at a pace comparable to that of the rest of the EU-15.

The EU-15 refers to those member countries of the European Union prior to the accession of 10 candidate countries on 1 May 2004. They are: Austria, Belgium, Denmark, Finland, France, Germany, Greece, Ireland, Italy, Luxembourg, Netherlands, Portugal, Spain, Sweden and United Kingdom.

“Sweden would never have had such a stable economy had IT and telecoms companies never boosted the Swedish economy,” said Gozzo, talking about major companies such as Ericsson.

Hart said South Africa had not had a great start to the year: the price of petrol had gone up; the rand had declined; interest rates were up; trade unions with political ambitions were fighting employers and not working together with them to find solutions. All of these factors were not good for investors.

“All this does not mean doom and gloom; we are part of the fragile five. These are countries with huge twin deficit markets in emerging markets and include Brazil, India, Turkey, Indonesia and South Africa,” said Hart. South Africa was a triple deficit country as even households had deficit.

“The reason why South Africa is part of the fragile five is the current account deficit because our production has fallen off due to labour unrest.”

About Brand South Africa’s involvement, De Kock said its job was to give South Africa an endearing image to the rest of the world to boost investments.

Hart added: “South Africa has identified the exports sector as an engine for higher, more inclusive and job-intensive growth with the [National Development Plan], aiming for export volume growth of 6% a year in order to achieve an annual increase in real gross domestic product growth of about 5.5%.”