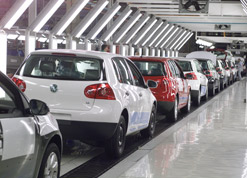 The Volkswagen South Africa plant in
Uitenhage is the largest vehicle factory
in Africa. Manufacturing – the economy’s
second-biggest sector – grew by a
surprising 8.2% in the fourth quarter
of 2007 after falling 2.5% in the
third after a series of strikes in the
vehicle industry.
Photo copyright Volkswagen South Africa

South Africa’s economy grew by 5.1% in 2007, its third successive year of growth at around 5%, according to data released by Statistics South Africa on Tuesday 26 February.

Both the rand and the JSE, South Africa’s stock exchange, surged at the news. The JSE’s All Share Index closed 1.62% stronger at 30 297 points on Tuesday, after opening at 29 813. The rand rallied 1% to R7.52 against the dollar, its strongest showing since 19 February.

The strong figures indicate that the demands of a growing economy are indeed responsible for South Africa’s current power crisis.

“The data are incredibly upbeat but questions will still be asked about how much deterioration to expect in the first quarter of this year, when we see the worst of the energy crisis impacting on the figures,” Razia Khan, regional research head for Africa at Standard Chartered in London, told Business Day.

“Looking at the strength of the economy – in sectors like agriculture, construction and services – there is still a healthy level of strength that will help sustain it through the worst of the crisis.”

According to Statistics South Africa, the main drivers of growth in 2007’s final quarter were manufacturing, financial services and construction.

Manufacturing – the economy’s second-biggest sector – grew by a surprising 8.2% in the fourth quarter after falling 2.5% in the third after a series of strikes in the vehicle industry.

Growth in financial services, the economy’s biggest sector at 20% of GDP, slowed to 8.5% from 12.3% in the third quarter but continued to drive economic growth.

Growth in retail sales, the economy’s third-biggest sector, dropped to 2.1% in the last quarter, its slowest rate in six years, while mining contracted 1.7% after strikes forced some closures.