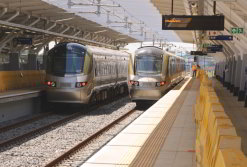 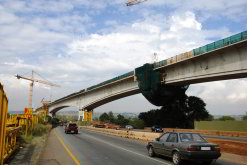 The Gautrain’s elegant viaducts have been
engineered to be not only mechanically
sound, but aesthetically pleasing.

This image of a section of viaduct under
construction took first prize in the 2007
edition of the annual South African
Institution of Civil Engineering’s photo
competition.
(Images: Gautrain)

Gauteng’s world-class rapid rail project, the Gautrain, has taken another step towards completion with the announcement that all track has now been laid.

The final stretch of the 147.6km route went to ground at Johannesburg’s Park Station on 3 March 2011.

Gautrain’s official construction update at the beginning of February revealed that at the end of the preceding month, 97% of the track was complete.

In early June 2010, just before the start of the 2010 Fifa World Cup, Phase I of the Gautrain route opened for commercial service. This included the section between OR Tambo International Airport and the station in the business district of Sandton, north of Johannesburg’s city centre.

The two intermediate stations at Rhodesfield and Marlboro, as well as associated bus and feeder services, also came into operation, guaranteeing visitors to the country a quick and easy way to get from the airport into the suburbs.

Part of Phase I included the completion of the Gautrain’s operations control centre in Midrand, and the train and bus depots, also in Midrand.

Construction started at the end of September 2006 and Phase I, which was scheduled to take 45 months, was completed three weeks ahead of schedule.

The February construction update also mentioned that parking facilities are complete at Park Station, and features such as internal finishes, platform tiling, and mechanical and electrical systems are well advanced. Ticket machines and gates have been placed.

Further north, Rosebank’s underground station, including the parkade, is nearly complete. Rolling stock has already arrived at the station to test the station’s facilities, and testing of trains and the signalling system between Rosebank and Pretoria is ongoing.

At Midrand Station, all work is just about complete, and trains are regularly passing through the station en route to Pretoria, as part of the testing process. Between Midrand and Centurion, south of Pretoria, all construction work and systems are complete, including Viaduct 4 over Olifantsfontein Road.

Centurion Station itself is complete, and work on the parkade is at an advanced stage.

Between Centurion and Pretoria, construction is essentially complete. This includes Viaduct 6, which crosses the busy Eufees Road just outside Pretoria. The remaining work is mainly cosmetic, such as landscaping and laying topsoil.

At Pretoria Station, the only work still outstanding is the tiling of the station platform. All railway construction is complete, with the first Gautrain carriage arriving at Pretoria station in mid-January 2011. Outside the station, the parkade and bus terminals are almost finished, and work continues on the satellite bus depot near Pretoria Zoo.

Between Pretoria and the end of the line at Hatfield, Viaduct 7, which carries the Gautrain over Nelson Mandela Boulevard, is complete. This stretch of track also involved construction on several bridges, which had to be either widened or lengthened to make room for the Gautrain tracks. This work is also complete and the bridges are once more operational and open to traffic.

The final stop is Hatfield Station, where work on the concourse and parkade, as well as approach roads and the bus terminus, is nearing completion.

Rocketing along at a maximum speed of 180km per hour, the Gautrain runs between the main stations of Hatfield, Midrand and Park, branching off at Sandton to OR Tambo Airport.

Besides these three main stations, passengers will be able to step onto the train at seven other stations along the way.

The train is built to international standards of public transport and will take just 40 minutes to reach Johannesburg from Pretoria – a welcome respite from the lengthy car journeys and heavy traffic that many commuters have to endure on a daily basis.

Between Sandton and OR Tambo, the journey takes a scant 15 minutes.

Initially, six trains per hour in both directions will carry passengers to their destination in comfort and safety. The service will run for 18 hours a day and includes dedicated bus shuttles.

The Gautrain is expected to boost the region’s economy, generate employment, and contribute to the wellbeing of employees by allowing them to be more productive, instead of sitting in traffic jams for hours every day and arriving at work flustered and irritated.

The bulk of construction of Gautrain’s rolling stock took place in South Africa, and all 81 locally built rail cars are now complete. The UCW Partnership factory in Nigel, close to the Gauteng border with neighbouring Mpumalanga, trained and employed 95 people – 13 of which are women in supervisory or quality control positions – from the community to work on the cars.

The last car was delivered to the testing depot in Midrand in early December 2010. The Gautrain fleet consists of 24 sets of four cars, which amounts to 96 individual cars. Ten of these run on the airport route and have been adapted with extra space for luggage.

The Gautrain is based on the internationally acclaimed Bombardier Electrostar carriage, popular on routes all around the world. 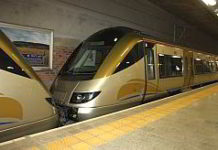 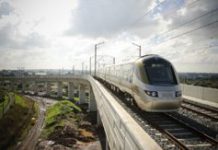