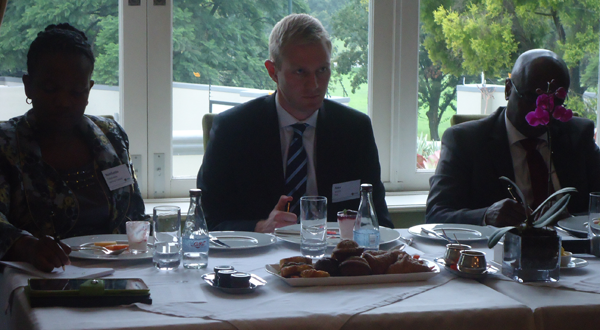 Nomfundo Tshabalala, the head of department in the Gauteng provincial treasury, FNB economic analyst Alex Smith and Finance MEC Mandla Nkomfe all believe that the budget highlights the fundamental economic strategy to facilitate the restructuring of the economy and prepare it for its next phase of development (Image: Melissa Jane Cook)

Fiscal constraints, a challenging macro-economic environment and the large current account deficit were raised by business and government officials at a breakfast held to unpack the Gauteng provincial budget.

The intimate event was hosted by First National Bank (FNB) at the Marion on Nicol on 7 March. Host Jeremy Maggs encouraged robust interaction between the captains of industry, stakeholders and other delegates. Gauteng is the economic powerhouse of the country, adding some weight to its budget, which was met with much approval from those at the breakfast.

A focus of the budget was unemployment, and it took a confident stand that there would be six million job opportunities in the free market. The government would also pull its weight and work with small, medium and micro enterprises, rather than leave it all in the hands of the private sector. For example, R180 million was set aside for youth unemployment.

Alleviating poverty was at the heart of the document, and Finance MEC Mandla Nkomfe said: “The highest concentration of poverty is in Gauteng, followed by the Western Cape. There is a correlation between urbanisation, migration and urban poverty… At the moment our cost of living is high, food and transport costs are high. But this budget will bolster confidence so that we can have healthy growth in the economy.”

South Africa was experiencing fiscal constraints and the global economy itself was slowly recovering from recession. This duo had a negative impact on the economy, and the private sector would play a crucial role in mobilising jobs, he added.

An important issue was infrastructure development, and R10.6 billion was earmarked in the budget for this sector. In addition, R3.4 billion was allocated to health care and education, with the emphasis on more schools, clinics and community health centres.

Manufacturing was important in Gauteng, Nkomfe said, and there must be motivation for the province to become a manufacturing hub. “There are issues around reindustrialisation. We need to manufacture here. This will go a long way to entrepreneurial development,” he added.

“The South African economy is rising, and we need to find ways to exploit these opportunities. We need to focus more on competition and make ourselves more competitive. We need to deal with industrial issues and labour unrest. There is the possibility of working together – the private sector and the government.”

Nkomfe was introduced by Kgosi Ledimo, the chief executive of FNB provincial and local government, public sector. He said Nkomfe was “now in the position of managing one of the largest economies in South Africa”. “He is able to mobilise financial resources and ensure that infrastructure development in the province is taking place,” Ledimo told the assembled business people.

To place the budget in context, it was reiterated that 2009 was characterised by challenges stemming from the uncertainty in and the rapid deterioration of the external economic landscape. With the global economic crunch that started in 2008, there was a sharp slowdown in South Africa’s economy, as there was in most countries.

But this 2014/2015 provincial budget showed that South Africa had pulled itself out of the doldrums and was on its way to impressive growth and development. Over R86.9 billion had been set aside, which was expected to grow to R98.9 billion by 2016.

Nkomfe said it would move Gauteng forward in a very positive way, and create great change. “A lot of money has been spent on roads, schools, hospitals etc, to provide a better life for Gauteng people.”

He explained the three sources of the money used in the budget: the government got more than R950 billion from those who paid taxes; conditional grants; and own revenue through gambling tax and car licences and so on. The greater the province, the more money there was to go round. At about 12.7 million people, Gauteng had the largest population in South Africa, and therefore got the most money.

Another criterion in deciding how much money was earmarked for provinces was the number of its school-going children. In this category, Gauteng was second to KwaZulu-Natal. In terms of how a province was using primary health care facilities, again Gauteng was second to KwaZulu-Natal. “We need to put more resources into better primary health care,” Nkomfe said.

FNB economic analyst Alex Smith said that South Africa’s growth was driven by consumption and the large amount of imports. “There was a huge amount of money [coming] into South Africa during the recession in 2009 as people wanted good returns, but this was a volatile stimulus. It strengthened the rand and supported imports.

“However, we consume and import too much. The trade deficit [has widened], especially with Marikana in 2012. We import approximately R200 billion worth more than we export and this is funded by foreign investment.”

He maintained that the country’s economic challenge lay in managing its large current account deficit. “The government has done well on reigning in its spending. The focus must move to investment and production. We need to become more competitive and export more, produce more, and focus on human capital development, the productivity of workers, a healthy worker is a productive worker.”

In addition, South Africa needed to sort out labour unrest, Smith said, and focus on efficiency in terms of training and human capital, which must be of the highest standard. Entrepreneurs needed incubators so their businesses had longevity.

“We need to support local industries with local procurement. The key message is that the government has done well in allocating funds, but how efficiently is the money being spent? We need to get maximum value for every rand we spend. We need to curb spending on imports and reduce inflation.”

Another focus was the leveraging of technology. Innovation must be worked on at a government level, Smith said. Tourism was a massive source of revenue. “Last year, more money was spent on tourism than gold. We can and must do more to boost Gauteng’s reputation.”

It was a great time to celebrate 20 years of democracy, he added. “This time has given the government opportunity to lay strong foundations for the future and move South Africa forward. In order to address issues of unemployment, poverty and inequality we need to deal with the problem of consumption and how our wage bill is ballooning.”

Nomfundo Tshabalala, the head of department in the Gauteng provincial treasury, concluded: “We need synergy between partnerships. This can be done with infrastructure development, issues of innovation and ensuring support of entrepreneurs and small, medium and micro enterprises.”

The budget had highlighted the fundamental economic strategy to facilitate the restructuring of the economy and prepare it for its next phase of development. “We are all up to the challenge,” Nkomfe concurred.