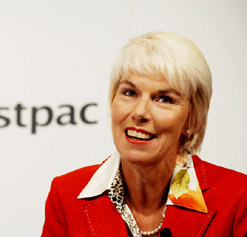 The South African diaspora has excelled across the world – in sport, medicine, literature, filmmaking and business. And one of its top achievers is Gail Kelly, appointed head of Australia’s fourth-largest bank, Westpac, in February.

Having started out as a teller at South Africa’s Nedbank in 1980, Kelly is now Australia’s highest-paid woman executive. (Allan Moss of Macquarie Bank, the country’s highest-paid male executive, is also South African.) Kelly is also ranked 28th on Fortune’s global list of the most powerful women in business – and now and then makes it onto an Australian list of worst-dressed executives.

From Latin to high finance

Born in Pretoria in 1956, Kelly’s initial education was worlds away from high finance: she studied Latin and history at the University of Cape Town, training to become a teacher.

After marrying Alan Kelly in 1977, she spent a few years teaching in Zimbabwe and South Africa. But she felt unchallenged, and in 1980 switched careers to become a teller in the Nedcor group’s banking division, Nedbank. Her potential was immediately evident, and she was swiftly moved into an accelerated training programme, completing an MBA in 1987 while expecting her first child.

Her second pregnancy, in 1989, produced triplets. But Kelly coped just fine: when they were only five months old and she still on maternity leave, Nedcor appointed her head of human resources.

In the mid-1990s the family decided to emigrate. Kelly flew to Sydney in June 1997 for interviews with three major banks, and was snapped up by Commonwealth Bank a month later. Her first position there was as general manager of strategic marketing, but it wasn’t long before CEO David Murray appointed her to his executive team.

Australia has a large expatriate South African community, who are readily employed there. “South Africans are sought after by Australian firms because they possess a high standard of education along with a good work ethic, proficiency in English, and excellent industry or corporate training,” says Mike Stowe, the head of Australian migration specialist firm Oz-LifeStyle.com. “Australian employers also know that South Africans adapt well to the Ozzie lifestyle and culture.”

By the time Kelly left Commonwealth she was head of the customer service division, accountable for sales, service and distribution across the bank’s retail branches, business banking centres, contact centres and electronic and internet channels.

In December 2001 Kelly was appointed CEO of St George Bank, becoming MD in January 2002 amid fears that the bank was a takeover target. When her appointment was announced the bank’s market capitalisation rocketed by A$97-million almost overnight.

In February 2008 Kelly took up a position as CEO and MD of at the Westpac banking group, a company recognised by the Dow Jones sustainability index as the world’s most sustainable bank for the fifth consecutive year.

Her Westpac appointment – regarded as one of Australia’s top corporate jobs – followed an extensive search conducted by the firm’s board at home and abroad. Kelly says of her appointment that she was “looking forward to working with the team to take what is clearly a very strong organisation to the next stage”.

And the organisation clearly agrees. Ted Evans, Westpac chair, says Kelly is “a proven chief executive whose values are closely aligned to the Westpac culture. It is clear she has the energy, skills and experience we need.”

Gail Kelly may have made it big in Australia, but she hasn’t turned her back on her home country. She returns to South Africa regularly to enjoy game parks and visit friends.