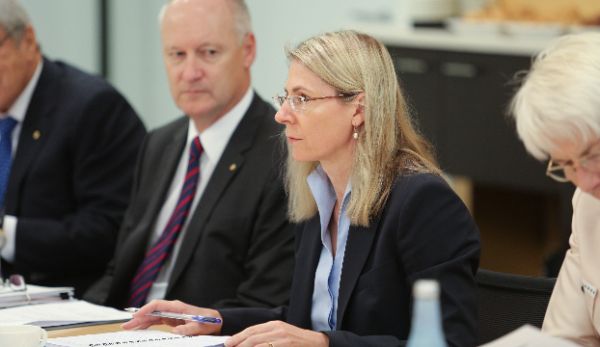 “The G20 has the right mix of developing and mature economies to lay the foundation for sustainable growth,” Dr. Heather Smith (Image: B20 Australia)

Goods are made in the world. Your smartphone contains rare earth minerals mined across Africa. Different components are manufactured across the globe and, in the case of your iPhone, assembled at a factory in China before being shipped to the US. Older smartphones are shipped to the developing world, where they are refurbished and resold, or recycled for the gold, silver and platinum used in their manufacture.

Until very recently American tech company Apple was the most highly valued in the world, but, it has fewer than 600 000 American employees. Across the globe however, Apple has created more than 1.6 million jobs, not including those in the retail sector.

When one link in that chain breaks, then the entire interdependent and integrated world economy is threatened with failure. The effects can be devastating, as the world realised when financial markets in the US collapsed, sending ripples across the globe.

In his introduction at the G20 Outreach Seminar at UNISA, vice chancellor, Mandla Makhanya, explained that the global economy was slowly backing away from that chasm, but that there was still work to be done. He pointed out that global economic activity and the meltdown in 2008 had shown governments that what it meant to be a nation had also changed irrevocably.

Makhanya highlighted challenges facing nations – jobless growth and growing inequality – but added that there were people working to tackle these problems. The G20 group of nations, and its target of 2% growth, is the best hope to help reap the promise of better futures for all. “The G20 is capable of catalysing a global turnaround. They are able to grapple with challenges at a global level and can put in place workable solutions.”

Australia has chosen one of two policies to spur economic growth. The first one, austerity, would impose fiscal responsibility on debtor nations and depress economic growth, especially in Africa where economies are based on mining and agriculture. Austerity drives down the prices of precious metals by artificially curbing demand.

Smith explained that Australia has chosen to stimulate growth and prosperity instead. She is cautious enough to counsel care. Australia’s path, and that of the G20, relies on government monetary and trade policy working together to offset the risks of inflation and sovereign debt. Uncontrolled, these could cause a more damaging future financial crisis.

Smith explained that Australia believes open and free trade is the best way to lift Africa out of poverty. “Africa should be a growing part of the world economy; we should be lifting more people out of poverty in Africa. But we will not do it with all the trade barriers that exist between African countries.”

With the rolling presidency Australia’s for 2014, it has made formulating a structured G20 African policy a priority. Using the New Partnership for Africa’s Development (NEPAD) – a continent-wide vision and policy framework meant to accelerate economic co-operation and integration among African countries, adopted by the African Union in 2001 – G20 countries have engaged piecemeal and on an individual basis with Africa’s countries.

Australian trade with Africa has been growing; its two largest African trade partners are Nigeria and South Africa and that trade now makes up a third of its foreign direct investment. Trade with Africa is not a philanthropic act on Australia’s part, nor on that of its G20 partners. It is a policy deigned to rebalance the global economy; as the economies of Europe and North America wane, Africa is seen as a new centre of demand.

According to IMF research, emerging and developing markets will overtake established economies within a few years. “Asia’s middle class gave rise to the Asian Tiger economies. We see the same patterns in Africa. The African Development Bank numbers Africa’s middle class at 350 million, and it is growing. Open borders have transformed the world, and it will transform Africa. Today Africa is 30% more open to trade than it was in 1960 because governments understand the importance of free trade.”

Australia’s five-point plan is intended as a guide to strengthen co-operation between developed northern economies and emerging and growing nations. Smith believes that improved infrastructure leads to improved trade, investment and employment and will eventually empower skilled workers.

According to the World Trade Organization, cross-border trade has grown by 4% in 2014, to levels not seen before 2008. If that growth can be sustained, Africa can, trading with itself and the rest of the world, lift itself out of poverty.

“G20 policies on cross-border trade will affect inequality by lifting more people out of poverty. If governments can be convinced to take action to free up trade, especially across borders, it will have a ripple effect on development issues. By not stopping trucks at the border you improve the efficiency of the supply chain, create jobs along the chain and positively affect issues like food security as well.”

The core goal of Australia’s plan is stabilising the world’s economy: to return it to a semblance of its pre-2008 efficiency. The G20 believes the open markets will create opportunities for businesses in Japan to sell its TVs to customers in Europe, while a farmer in Kenya will be able to ship produce to America, without losing a third along inefficient supply routes, as easily as selling to Kenyans.

“Stability as it the core of what we are trying to achieve,” Smith concluded. “We accept that the financial crisis was created in developed economies but we are all connected. We need Africa to be part of the change because the poorest of the poor were the hardest hit.”

The world still faces global challenges, but as Africa has prospered members of the industrialised G20 nations have begun to look at the continent not as a charity case, but instead as the newest, most promising market, holding the promise to stabilise and rebuild the world’s economy.