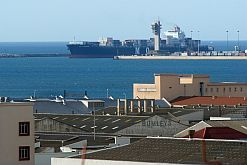 A ship leaving a harbour in the Eastern
Cape.
(Image: MediaClubSouthAfrica.com. For
more free photos, visit the image library) 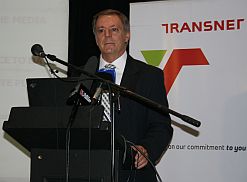 Outlining its five-year strategy at a media briefing in Sandton, Johannesburg, on 18 March, the parastatal said it would spend more than R93-billion on infrastructure expansions and various other projects to improve customer services and ensure financial sustainability in future.

The five-year investment is “mainly to accommodate new projects to support the planned volume growth”, Transnet said. In the last five years it has invested R74-billion in replacement and expansion operations, and has already secured R20-billion to spend in the 2010/11 financial year, which begins on 1 April.

The new investment plan has been upped from R80.5-billion to R93.4-billion to fund the acquisition of 304 locomotives, which will expand its existing fleet of 1 978 within three years. “It means 15% of our fleet will be new,” said Transnet’s acting CEO Chris Wells.

It also wants to increase its stock of 72 643 wagons by 10% to improve coal and iron ore freight capacity and the general freight business. There will also be a greater emphasis on the upkeep of wagons, because if “a wagon is maintained, it can have a long effective life”, he said.

Another “massive investment”, according to Wells, is the acquisition and installation of 19 new container-handling cranes at South African port terminals within the next five years.

The country’s coal industry has not been on top form since 2005, Wells said, but Transnet should be able to address this by increasing capacity on its coal line from the current 69-million tons to 81-million tons by about 2014.

The group will make it a “top-class business through a medium-term plan”, he said.

Better service delivery is also part of the five-year strategy, Transnet said. It will work towards reducing rail delays and cancellations by 26.8%, for both arrivals and departures. Shipping delays in ports will be minimised, while security of fuel supply to pipelines will be prioritised and production interruption reduced by 21.5%.

Transnet was not left unscathed by the global recession that struck in 2008, with general freight and container volumes, which make up 53% of its revenue, dropping by 20% and 15% respectively.

But Wells said the parastatal did manage to mitigate the impact by responding to volatility early on, enabling it to avoid mass retrenchments. “We were never desperate on the market like many other companies were.”

Among its major investments for 2009/10, Transnet named its R2.8-billion revamp of Durban harbour, which included the entrance channel being deepened and widened. Before it only could accommodate ships slightly over the 4 000 twenty-foot equivalent unit (TEU) capacity, but now those of 8 000 TEU can dock there. “They [new 8 000 TEU ships] would not be able to come to Durban if we had not made this investment,” said Wells.

A further R4.4-billion was pumped into the Cape Town Container Terminal Expansion Project, which has boosted capacity from 700 000 TEU in 2007 to 900 000 TEU. There are future plans to increase capacity even more to 1.4-million TEU.

Cape Town’s berth 601, the first of its four berths to be expanded, has already been deepened to 15.5m to accommodate larger vessels.

Transnet has also driven the multibillion-rand construction of the new deep-water Port of Ngqura in the Eastern Cape. Boasting a container terminal of 60ha, the port has 22 cranes and a TEU capacity of 800 000, which is set to reach 1.5-million TEU by 2015.

Ngqura, which has been operational since October 2009, is being positioned to become a major transshipment hub for land-locked Southern African countries.

Transnet said it hopes to grow volumes by 7% per year over the next five years through improvements in general freight and increased capacity on export coal and iron ore lines “in line with industry requirements and international demand”.

This is about 3% above GDP growth, said Wells.