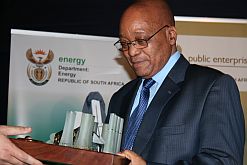 Economic and political relations between South Africa and France will receive a boost through a state visit currently under way in the European country. The delegation is being led by President Jacob Zuma.

Zuma is being accompanied by Cabinet ministers who will play a critical role in realising goals outlined in the New Growth Path, the South African government’s economic growth and job creation blueprint.

Minister of finance Pravin Gordhan and Rob Davies, trade and industry minister, will attend the French state visit from 2 to 3 March 2011. They will be joined by their South African counterparts in police, energy and international relations and cooperation.

With South Africa aiming to create no less than 5-million jobs over the next few years to reduce the unemployment rate by 10%, seeking international investments to stimulate the country’s economy is now more critical than ever.

“Minister Davies and Finance Minister Gordhan will engage the business community of France to promote investments that will take forward South Africa’s quest for creating decent work,” said a statement from the Presidency.

An agreement through which the French Development Agency will provide €1-billion (R9.6- billion or US$1.4-billion) to South Africa over the next three years will be signed during the state visit. The funds will be channelled into various state-owned enterprises.

A South African business delegation will join Zuma on his trip, with a South Africa-France Business Forum scheduled for 3 March.

Through exports to South Africa, France made more than R17-billion ($2.4-billion) in 2009, while the African counterpart’s exports to that country amounted to roughly R6.2-billion ($888-million). South Africa is determined to lessen the gap between the two totals.

“A major objective of the visit is to strengthen trade and investment ties with France,” said Clayson Monyela, spokesperson for the Department of International Relations and Cooperation, “and to address the challenge of the significant trade deficit that exists”.

“The visit will touch on investments in the green economy sectors,” said Minister of Energy Dipuo Peters.

Peters wants to lead bilateral talks on alternative energy schemes “in the light of South Africa’s strategy to double its energy capacity by 2030”.

According to her department, the country is currently between 70% and 90% reliant on coal for its primary energy needs and the government’s “de-carbonisation” campaign can do with some help from environment-friendly prototypes.

South Africa is currently investigating carbon capture and storage technology to ensure that its upcoming major power stations Medupe and Kusile, which will be fuelled by coal, do not emit excessive volumes of carbon dioxide.

The political situation in Côte d’Ivoire and North Africa will come under the spotlight when Minister of International Relations and Cooperation Maite Nkoana-Mashabane meets her French counterparts.

“The talks will no doubt touch on the African Agenda,” said Nkoana-Mashabane.

South Africa will also push for France’s support on the reform of the United Nations Security Council. The reform would include an African country gaining a permanent seat on the council, which is still dominated by five veto-wielding states.

Other important issues between France and its African counterpart include multilateral cooperation on international climate change talks. The work of the World Bank and International Monetary Fund will also come up in the discussions.

Currently chairing the G8 and G20, France is a strategic partner for South Africa in many ways. Bilateral work between the nations will have other spinoffs for the G20 too, as both powers chair its Development Working Group.

Sarkozy led a state visit to South Africa in 2008, where he met former president Thabo Mbeki.

During that trip the French leader announced a five-year R100-billion ($14-billion) investment plan in sub-Saharan Africa. Bilateral agreements on transport, tourism, defence and scientific cooperation were also signed between the French and South African governments.