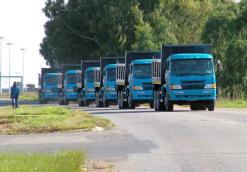 Negotiations between FAW and government officials at local, national and provincial level have been underway for over a year, and will culminate when construction on the plant commences in the first quarter of 2012.

The facility’s actual location will be announced in due course.

The plant will be able to produce 5 000 truck units per year and will employ about 1 000 local workers by the time the first vehicle rolls off the assembly at the end of 2013.

Another 400 skilled and unskilled labour will be required for assembly of the plant.

The new facility will produce a wide range of trucks, from extra heavy commercial to five-tonners, with components imported from the parent company in China.

According to FAW operations manager Mehdi Abbas, this is just the start of investment in the province, as there are also plans to extend the development to the assembly of passenger vehicles.

This will include single and twin-cab pickups (“bakkies” in local terminology) and other types of sport utility vehicles.

FAW foresees production of 30 000 units on the passenger vehicle assembly line which is planned for 2015. The company also hopes to introduce a sedan assembly plant later at the same site.

“The plant will act as an export base for business into the rest of Africa,” says Abbas.

FAW has been able to maintain its growth in tough economic times, even increasing its global market share, and believes its investment bodes well for South Africa.

“The investment will have a positive effective on the perceptions with regards to the South African economy, showing that the macro-economic environment is still healthy and that overall, investment opportunities remain attractive in the country,” says Abbas.

The company is registered with the local engineering and manufacturing sector training authority merSETA and will continue to use its in-house training facilities to impart skills to local labour forces as part of its social investment programme, confirmed Abbas.

FAW is the third largest truck manufacturer in the world and China’s leading exporter of vehicles. The company has operated in South Africa for the last 18 years, with its head office in Isando, east of Johannesburg, and branches in Cape Town and Pinetown.

Coega Development Corporation business development manager Gustav Meyer says the FAW investment in the province will be significant and will have upstream and downstream opportunities in the future.

“In 2010, FAW sold over 2.5-million vehicles, 650 275 of which were their own home-grown brands, while the balance was split between Toyota and Volkswagen. The latter two are manufactured under licence in some of the world’s most technologically advanced vehicle assembly complexes.”

Talks are currently underway between the business and government sectors to establish an automotive cluster in the Eastern Cape by March 2012.

Through the Automotive Production Development Plan (APDP), vehicle production can be increased from the 550 000 units per annum currently produced to 1.2-million by 2020, according to President Jabob Zuma, who paid the Eastern Cape automotive industry a visit in October 2011.

The APDP came into effect in 2008 and is aimed at stimulating local content production and exports through various tariffs and allowances.