The 49M campaign is aimed at helping
citizens to get into the habit of using
energy efficiently.
(Image: MediaClubSouthAfrica.com. For
more free photos, visit the image library) 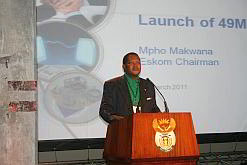 Eskom’s chairperson Mpho Makwana said
it is the collective effort and commitment
of all South Africans that will make a
difference to the country’s energy future.
(Image: Ray Maota)

The launch of the 49M energy-efficiency drive, headed by Deputy President Kgalema Motlanthe, took place at Turbine Hall in Newtown, Johannesburg, on 18 March 2011.

Power to the people

The 49M campaign, referring to the 49-million people who live in South Africa, is endorsed by government and business leaders. Its objective is to instil a long-term national culture of energy-saving.

The campaign will run for five years.

Motlanthe said: “The movement being launched today is a vital component in the country’s drive for responsible economic and developmental growth. We each have it within our power to make a difference to energy-efficiency in South Africa.

“Government has pledged itself to ensure that all South Africans have access to electricity. As a public utility responsible for electricity generation, Eskom has over the years extended its network and through electrification projects, brought quality of life and economic opportunities to many rural areas who had previously been denied access to services.”

The campaign asks all South Africans to “lift a finger”, meaning that it takes just one flick of the hand to switch off appliances that are not in use.

The symbol for the campaign is a yellow reminder string tied around an index finger with messages: “Remember your power” and “If you are not using it switch it off”.

There will also be stickers available for people to put in strategic places such as on plugs and light switches, as a constant reminder.

Eskom’s chairperson Makwana said: “It is the collective effort and commitment of all South Africans that will make a difference to the energy future of our country.

“Some South Africans have already made a start with simple actions, such as using compact fluorescent lamps instead of incandescent globes, keeping unused appliances switched off and reducing electricity wastage, which can have a dramatic impact.”

Minister of Energy Dipuo Peters added: “We have identified energy-efficiency and conservation as a low-risk and low-cost option to respond to climate change imperatives and as a way of postponing some of the investment in infrastructure, the funding for which in this economic climate may be challenging.”

It is predicted that South Africa will need to double its current installed capacity of 42 000 megawatts over the next 20 years to keep up with demand.

Eskom has committed to spend R300-billion (US$43-billion) by 2020 to make sure South Africa meets its energy supply and demand ratio.

Public Enterprises Minister Malusi Gigaba said: “Government is committed to ensuring long-term security of electricity supply for all South Africans and will continue to partner with Eskom and other relevant stakeholders to achieve this goal. We remain resolute that the country should never go through another period of painful, rotational load-shedding as experienced in 2008.”

Eskom CEO Brian Dames said: “The movement will be built on ‘three P’s’, which translate to save the power, save the planet and save your pocket.”