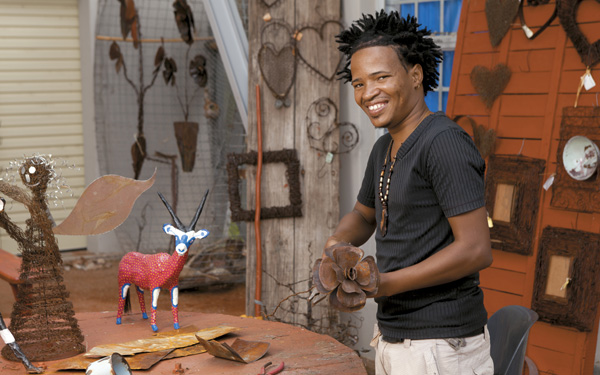 A young craft artist at work in Upington in the Northern Cape, one of the poorest regions of South Africa. Selling craftwork is one small business that allows the unemployed to survive in the economy better than they did before. (Image: Brand South Africa)

• CNN’s Richard Quest examines the rise of Africa
• Cooperation, trade and education key to Africa’s success – Coleman
• Seven reasons to be optimistic about Africa
• The dividend of democracy: 20 years of economic growth
• Global perceptions key to competitiveness and foreign investment

If South Africa is to overcome its problem of high youth unemployment, young men and women should look to running their own small businesses – and be taught how to do it from a young age. This was one of the ideas discussed at the CNN-Brand South Africa breakfast forum with CNN anchor Richard Quest, hosted by the Nelson Mandela Foundation in Johannesburg on 13 May 2013.

The English-born journalist, who anchors Quest Means Business on CNN International, led a discussion that looked at South Africa’s role in the rest of Africa and in the world.

Part of that education, he said, would be to make young people understand that failure is a part of being an entrepreneur and that perseverance was needed to get through hard times. But, Matola added, support structures would have to be there to ensure failed entrepreneurs did not fall out of the economy. “If you look in the US, a lot of entrepreneurs have failed before, but the system does not necessarily discard them,” he said. “What it does is give them another opportunity. We need to create mechanisms for that.”

He said organisations funding entrepreneurs should learn to manage and deal with failed businesspeople. “It’s about how we coach, and mentor, and put back into the system those entrepreneurs – as opposed to discarding them.”

Colin Coleman, managing director of Goldman Sachs South Africa, said he encouraged budding entrepreneurs to start businesses as they have the potential to grow. He gave mobile network giant MTN as an example of a thriving South African company that grew from nothing. “Go for it, find your opportunity, find the capital and go build a business, because I think businesses will grow.”

The day before the forum, Quest was guest host for an hour on Gauteng’s Talk Radio 702. He said he was astonished at the number of young callers to the show who claimed not to have voted in the national elections on 7 May. “I couldn’t understand – especially in a country with a history of recent blood being shed so that people of all colours and races could vote.”

But Matola countered that he believed the youth, particularly the “born frees” who only recently reached voting age, were becoming aware of their rights, responsibilities and the role they could play in sustaining the country’s democracy. “If you look at the comments of one of the young people today, the youth are basically crying out to get involved,” he said.

Matola was talking about Bonolo Ramokhele, a member of the World Economic Forum Global Shapers programme, who claimed young South Africans were left out of discussions that would directly affect their future.

It was important for the youth to play a part in ensuring they could shape the future of the country, Matola said. “This being the first election for the born frees, one hopes they gleaned insight from this, they learned from this and they really come to an understanding of how they need to exercise their democratic right to shape the future they want for this country.”

He suggested that for young South Africans to become more involved, organisers of discussions such as the breakfast forum should ensure there was a panellist representing the youth.