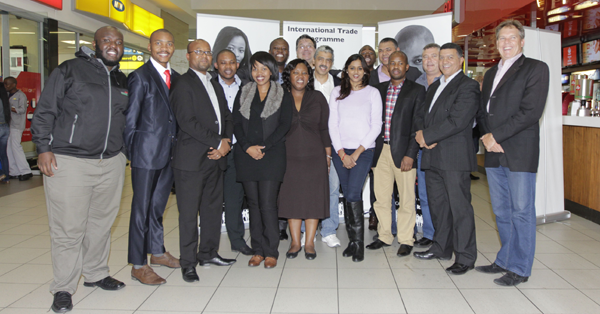 Another successful International Trade Programme (ITP) trip – the most successful so far – concluded when 14 entrepreneurs returned to South Africa with business deals and partnerships lined up. (Image: The Lime Envelope)

Another successful International Trade Programme (ITP) trip – the most successful so far – concluded when 14 entrepreneurs returned to South Africa with business deals and partnerships lined up.

It was the third ITP trip in two years, on which 14 South African entrepreneurs representing 12 businesses visited the United Kingdom. They touched down at OR Tambo International Airport last week, bringing business back home.

The ITP aims to stimulate trade between South African entrepreneurs and British partners, fast tracking the growth of local entrepreneurial businesses. It is held that entrepreneurship is key to economic growth and job creation in South Africa. Hundreds of entrepreneurs from across the country applied for inclusion on the ITP. The candidates were chosen during a rigorous selection and training process at the end of 2013.

Medo, which connects large companies with an annual turnover of more than R35-million with emerging and smaller enterprises, is the group behind the programme. It is sponsored by British Telecom Global Services (BT). This latest tour yielded the best success rate ever. Success is based on actual agreements concluded. Bjarke Gotfredsen, the joint chief executive and co-founder of Medo, says: “Our first tour had a success rate of 20%, our second 50% and this one I would say anywhere between 70% to 80%.”

The success is due to a number of factors. “The entrepreneurs are more prepared for the tour every year and as tour facilitators we have also learned where to go and we have built up better connections. For example, where we stayed this time was better for the entrepreneurs in terms of getting around as it did not take as much time as previously experienced.”

He also says their partners in the United Kingdom are better prepared. “Our UK partners put in a big effort and they have been building on the momentum from the first tour. Coventry University was extremely insightful, for example, hosting 10 lecturers presenting not just on technology, but also on entrepreneurship. Each entrepreneur also gave a short presentation on their business and ideas, and connections were then brainstormed with the experts at Coventry University.

“This was also the first time that BT sent two representatives on the tour and it was very helpful to have them along,” Gotfredsen adds.

Rodney Heubner, the contract manager for sub-Saharan Africa at BT Global Services, was one of those representatives. “The success of the tour for me was on the faces of the entrepreneurs when they had a meeting and secured a deal or contract,” he says. “I was impressed with all of them as they did their homework before we went over.”

A tour such as this one, he says, opens their minds to the opportunities and possibilities out there. “The focus on this tour was the ICT sector. We want to grow that sector by investing in it through initiatives such as the Medo ITP and, in doing so, bring these entrepreneurial businesses into our supply chain.”

The businesses and their deals

Henk Koekemoer, who owns CashCow in Cape Town, an accountancy board game and kit, was one of the entrepreneurs on the programme. He received an endorsement from the International Association of Bookkeepers for CashCow. In addition, Serious Gaming Institute will develop CashCow into a digital format. “This means CashCow will become available worldwide – on smart phones and tablets.” Koekemoer also had discussions with Price Waterhouse Coopers in the UK about how the financial services firm could use his product to assist in the basic learning of accounting throughout the world.

Itumeleng Legodi of Systemwox ICT in Centurion was another entrepreneur on the tour. The company provides ICT business solutions to companies so they can operate more efficiently. These solutions include bulk texting and crowd sourcing. “We have secured an agreement in principle with Capium to distribute their products in Southern Africa. I am overwhelmed and pleased with the deal. I think it would have taken me much longer to yield such a result if I had to do it on my own, instead of through the Medo ITP,” Legodi says.

Also on the programme were two representatives from AC Electromech in Middleburg. Josias Motsoeneng, the chief executive director of marketing and projects, and Hendrik van Rooyen, the chief executive director of risk management, were very pleased with the tour. “We secured an exclusive licence agreement to sell and distribute Hansford products throughout Africa,” they say.

AC Electromech provides predictive and preventive machine health monitoring technology to the mining, manufacturing and agricultural sectors. Hansford products, together with the software AC Electromech is developing, will mean machine health monitoring in real time. “Maintenance costs in the mining industry are very high. Technicians have to travel to the mines to scan the machines and then come back to the office with the data. With new software we can offer online live data, meaning analysis of machines can be done in a couple of hours. The client can also access the data 24/7.”

They are also in talks with BT, which will lead to its entry into the oil and gas sector. This should be finalised at the end of this month.

Both businessmen were happy with how the tour went and their progress. “A tour such as this also allows us to see what other entrepreneurs in other countries are doing, and how their governments and institutes are assisting them. Medo and BT have given us the opportunity to engage in conversation at the top, instead of us fighting [from] the bottom to be heard to get to the top,” says Motsoeneng.

Van Rooyen adds: “I think the Department of Trade and Industry is moving in the right direction in South Africa. What we need is funding and research. A university should start a course for entrepreneurs to expose them to the institution and give them access to research.”

Fundi in Cape Town provides academic and training institutions with a delivery mechanism for their digital material. The company’s Kennedy Kitheka said the tour gave entrepreneurs the opportunity to see what they were capable of and to realise they were not that far behind in terms of technology. “Even if you do not seal a deal, you learn a great deal,” he explains.

His company was successful in securing the rights to digitise Limra’s content through its delivery mechanism. The pilot will run in the next month or two. But Medo does not only help to secure supplier relationships and expand trade within and outside South Africa; the company’s knowledge and experience in enterprise development also allows it to help corporate clients with their enterprise development strategies and broad-based black economic empowerment point accrual.