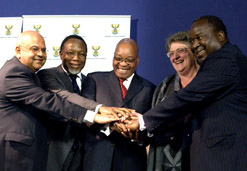 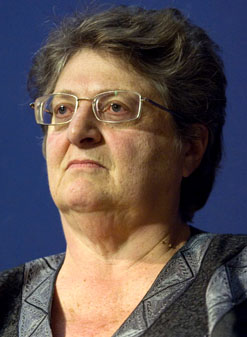 Marcus has the challenging job of ensuring that South Africa’s currency continues to weather the rough economic storms.
(Images: GCIS)

Although Marcus will officially start her duties on 9 November, her recruitment back into the highest financial body in the country has been hailed as a breath of fresh air in the Reserve Bank that has been in the firm clutches of current governor, Tito Mboweni.

President Jacob Zuma had re-appointed Mboweni as the Reserve Bank governor but Mboweni asked to step down in November to pursue other interests.

This brings an end to his 10-year tenure in office.

When Zuma announced the new appointment, he placed his full confidence in her ability to continue protecting the country’s currency. “Ms Marcus has extensive knowledge of the institution she is now called upon to lead, having served as a Deputy Governor of the Reserve Bank from 1999 to 2004.”

The president also thanked governor Mboweni for protecting the rand from the rough economic climate. “During Mr Mboweni’s tenure [the Reserve Bank] made a critical contribution to the country’s sustained economic stability and has pursued monetary policies that have fostered economic growth.”

Keeping a firm hand on the currency

Journalists attending the press briefing asked Marcus if she would continue implementing the current monetary policies or would invigorate change into the existing ones.

Marcus said although it was too early to speak about policy change, hers would be a style of collective leadership,

“I am there to listen and to learn and to see what the organisation is at this point in time and also to understand better the global environment.”

But African National Congress (ANC) secretary general Gwede Mantashe told the media the next day on 20 July that Marcus would not be changing any policy. “Any change presents an opportunity, but policy is not a function of an individual. Gill Marcus is going to implement the policies that are there. She is appointed a Governor of the Reserve Bank, she will find policy.”

Mantashe was speaking after a National Executive Committee meeting at Luthuli House, the ANC’s headquarters.

This seemingly cautious and stable approach by the government has held well with the rand, which has enjoyed stability in the wake of the new announcement, by the president.

According to online financial publication Fin24, Marcus’s appointment might even have helped the country’s currency.

“We had quite positive market reaction (to Marcus) this morning, and the rand is quite strong, though it also must be taken into consideration that the dollar is quite weak,” said Ion de Vleeschauwer, chief dealer at Bidvest Bank, speaking to Fin24.

“From an international perspective … it gets the uncertainty out of the way. I expect the rand to remain strong and keep on still watching the international scene,” said de Vleeschauwer.

Business Unity South Africa also welcomed Zuma’s appointment, saying that Marcus’s experience of the public and private sector made her a good candidate.

“She has a lot of banking experience and seems like a person who will not be a push-over. I do not think the markets will react negatively. She would also be familiar with the benefits of the current monetary policy.”

Rand Merchant Bank analyst John Cairns also voiced the financial institutions’ backing for the new appointment, “She comes with all the right credentials, having served as Deputy Finance Minister, Deputy Governor at the South African Reserve Bank and within the private banking system.

A rise within the ranks

The new governor leaves her position as the banking group Absa’s chairperson, a position she has held since 2007, to assume leadership of the reserve bank.

Having risen within the ranks in the ANC, Marcus has long been a standing figure within the party. In a 2006 interview newspaper Mail and Guardian, she said her fight for social justice has consumed her passion throughout her life. “Growing up, there was nothing else I was interested in. The SA condition was just so intolerable. So it didn’t matter whether I was 15 or 20, that was what my commitment was going to be.”

Born in Johannesburg in 1949, Marcus grew up in the then middle class suburb of Berea.

While attending school at Barnato Park High School for Girls in Johannesburg, she partook in various sports activities including swimming and horse riding.

When her family moved to London, she joined the ANC there in 1970 and in 1975 she was employed full time by the organisation.

She was the editor of the ANC’s weekly newsletter, the Weekly News Briefing, which was distributed around the world.

She returned to SA in 1990, where she started the party’s information department.

After a 30-year ban, Marcus was responsible for information distribution about the ANC to curious journalists who were keen to find out what the party was about.

She has 13 years experience in finances, since joining cabinet in 1996.

In accepting her appointment from Zuma, Marcus said, “thank you for bestowing on me this enormous honour and confidence in me to pick up on the institution, the South African Reserve Bank, on the excellent work that has been done to date by Governor [Tito Mboweni].”