Cape Concentration’s new tomato
processing plant will have an output of
350 000 tons per year of fresh tomatoes,
which translates to 48 000 tons of
tomato paste production a year.
(Image: Cape Concentrate) 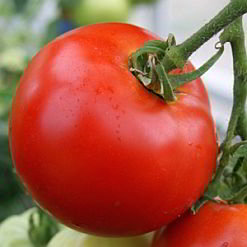 Tomato production and processing in the Eastern Cape is set to increase following the recent opening of Cape Concentrate‘s new factory in Port Elizabeth.

More than R200-million (US$27-million) has been invested in the tomato-paste processing company’s Coega Industrial Development Zone plant north of the city, making it the largest of its kind in Africa.

The funds covered the construction of the new plant and investing in infrastructure on Eastern Cape farms by installing irrigation systems, assisting farmers with land preparations for cultivation and providing them with appropriate tools for farming.

Gus Robinson, founder member and executive director of the company, said: “The business will be one of the lowest-cost producers in the world and the largest plant in Africa, competing with Chinese, Italian and Turkish imported paste. The product will meet global standards, including British Retail Consortium standards.”

The ownership of Cape Concentrate is split between the Jonah Capital Group and Post Harvest Environmental Technologies. The Jonah group, belonging to Ghanaian business magnate Sam Jonah, has a 52% stake, while the latter owns 48% of the company.

Sub-Saharan Africa currently imports about 460 000 tons of tomato paste from Italy, Turkey and China each year.

The company wants to reverse this trend by establishing four plants similar to the one in Port Elizabeth in other Southern and East African countries.

Running at full capacity, the South African plant will process 350 000 tons of fresh tomatoes per year. The daily output will be 1 000 tons a day.

The plant will operate for 11 months of the year and produce 48 000 tons of tomato paste annually.

About 1 500 to 2 000 field jobs and 160 factory jobs have been created as a result of the new factory and infrastructure development on Eastern Cape tomato farms.

About 30 farms in the Kouga region of the Eastern Cape have been commissioned to provide tomatoes for the plant. All of these are within an 180km radius of the factory.

Referring to why they focused on Kouga, Robinson said: “The farms in the Kouga area, although small, were already well developed, while other areas in the Eastern Cape, such as the land around the Great Fish River, were not yet well developed.”

Most of the farms are leased to Cape Concentrate, which in turn invests in infrastructure on these lands, while the farm owner gets paid a leasing fee.

Both commercial and emerging farmers are involved in the project.

Robinson said that it gives emerging farmers a direct market linkage whereby high profits can be achieved because of the long-term contracts at a fixed price.

Once the Cape Concentrate lease expires, emerging farmers will have a fully functional farm which can, in turn, attract other commercial ventures.

Eating tomatoes reduces the risks of cardiovascular diseases due to the fruit’s concentrations of lycopene – an antioxidant which reduces the risk of lipid peroxidation in the bloodstream.

Lipid peroxidation is a process by which fats, located in the membranes of cells lining the bloodstream, or fats carried in the blood, get damaged by oxygen.

In addition, the fruit has been proven to lower the risks of prostate cancer in men because of the presence of the nutrient alpha-tomatine.