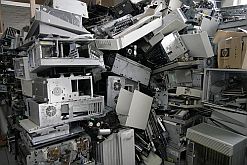 Workers processed over 60 tons of
e-waste in ten months. 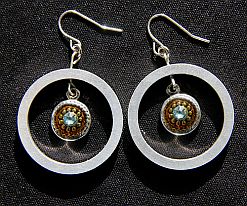 The aluminium rings used to make these
pretty earrings came out of a harddrive. 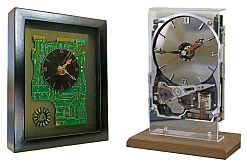 Left, an Africa-shaped clock made from
a circuit board, and right, a prototype of
the e-waste harddrive clock.

Preliminary results of a pilot project to tackle the growing problem of electronic waste, or e-waste, in Africa have been released, showing a number of beneficial spin-offs, including job creation and income generation.

The project, taking place in South Africa, Kenya and Morocco, is run jointly by IT giant HP, the Swiss Federal Laboratories for Materials Testing and Research, and the Global Digital Solidarity Fund, which works to narrow the digital divide on a global level. A number of local organisations and NGOs are also participating.

E-waste is defined as electrical or electronic equipment which is waste, including all components, subassemblies and consumables which are part of the product at the time of discarding. It includes computers and entertainment electronics consisting of valuable as well as harmful and toxic components.

The aim of the project is to assess and improve the current situation of e-waste management in Africa in such a way that more jobs can be created, especially in the informal recycling sector. It also seeks to incorporate proven informal processing activities into the scheme, and grow them into sustainable operations.

Project manager Mathias Schluep of the Swiss research organisation said that they were keen to tap into “some of the incredible entrepreneurial skills in the informal sector in Africa. By providing tools and training we have removed potential environmental and health problems that can be caused by handling e-waste incorrectly.”

As most e-waste in developing nations is still disposed of informally, there is little in the way of regulation to protect the workers who are exposed to harmful substances. These include heavy metals such as arsenic, lead and mercury, and chlorofluorocarbons.

The three organisations involved have to date gathered important information on how African governments, organisations and society are managing e-waste, which is currently one of the fastest-growing sectors worldwide.

“We see these projects in Africa as both providing employment opportunities for local communities and as a step towards a sustainable solution for tackling electronic waste in Africa,” said HP’s environmental business manager Klaus Hieronymi.

Recycling as a last resort

The South African operation, located in the industrial area of Maitland, Cape Town, represented the main focus of the project. During its initial run from February to November 2008 the facility processed about 60 metric tons of electronic equipment, generated an impressive income of around R140 000 ($14 000) in the 10 months, and created direct employment for 19 people.

The labour-intensive work involves low-tech material dismantling and component recovery from discarded electronic goods. Labourers were drawn from the local community, and were trained to refurbish and repair the unwanted equipment that poured in. Recycling was considered a last resort, and a few creative people even turned non-toxic waste into pieces of art, jewellery and useful items such as clocks.

Information gathered from the pilot stage will be invaluable during the second phase, which will see the partners tackling the private sector and governments with a view to broadening the scope of the project to other countries and, eventually, the entire continent. It is hoped that the project will move to a sustainable level, with the deployment of medium to large infrastructure pilots in various countries.

The Global Digital Solidarity Fund was delighted with the results, saying that the project has helped to solve the dilemma of what do with old equipment, since information technology is an important component of many developing countries’ economies. “We have moved some way to closing the loop by providing a model for safe and efficient treatment and disposal of e-waste,” commented spokesperson Cisse Kane.

Assessment studies carried out in Kenya and Morocco have shed light on the e-waste situation in the two countries, particularly in terms of legislation, local awareness, infrastructure, and the total amount of waste generated.

In Kenya the amount of waste produced from only computers, monitors and printers is about 3 000 tons every year, and this is growing. In 2007 the amount was 200% higher than in the previous year – this is attributed to the increasing importation of computers into the country. Steps should be taken now, said the project report, to address the emerging challenge.

In Morocco the e-waste generated by all electronic equipment, including televisions, mobile phones and computers, adds up to a massive 30 300 tons.

Neither country has any legislation in place to specifically address e-waste management. This is significant when considering the toxic content of e-waste. If not disposed of properly, heavy metals and other poisonous substances can leach out of discarded components into the soil or groundwater, contaminating plants and eventually the population.

Formalisation of the e-waste recycling sector in the pilot countries is one of the issues to be tackled by the project as it moves into a higher gear.

In South Africa the awareness of the importance of proper e-waste disposal is growing, and there are already a number of disposal points around the country. More information and exact locations can be found on the website of the E-waste Association of South Africa.

E-waste activist Johnny Clegg, better known as one of South Africa’s most loved musicians, has taken up the cause in his capacity as co-founder of black economic empowerment company Vuthela Services. Vuthela is the majority shareholder of e-waste recycling specialist African Sky.

The unit is made up of members of the national Department of Environmental Affairs and Tourism as well as representatives from South Africa National Parks. The Green Scorpions are tasked with enforcing the country’s various environmental laws, and bringing to book those who contravene the legislation.