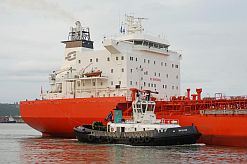 One of Durban harbour’s tugs guides
a container ship out of port.
(Image: Transnet Port Terminals) 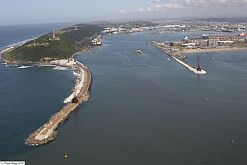 Plans are underway to further expand the port of Durban, with the addition of a new US$8-million (R70-million) rail facility attached to the container terminal, the widening of the harbour mouth, and other major projects.

The rail terminal is to be commissioned at the end of June and is part of a multi-billion capital investment programme by the port’s operator Transnet Port Terminals.

Construction is already underway on a $20-million (R164-million) expansion of the historic 15-berth Maydon Wharf, which handles bulk goods such as sugar, grain, fruit and fertiliser. The improvements include storage for 80 000 tons of maize.

Other improvements already completed include the $18-million (R140-million) truck staging area at the six-berth Durban container terminal, which alleviates the problem of queuing, and the $250-million (R2-billion) first stage of the conversion of the Bayhead Pier One into a container terminal, adding extra capacity of 720 000 20-foot equivalent units (TEUs) to Durban’s port.

The TEU is not an exact measurement but is based on the volume of a standard 20-foot long container. Because not all containers are the same height, the measurement cannot be standardised.

Phase two of the Pier One project is at the feasibility stage and involves the conversion of the former naval base Salisbury Island, resulting in an additional capacity of 800 000 TEUs. Pier One is expected to be fully operational by July 2010.

The Durban harbour widening project is at an advanced stage. From its present 122m width, the entrance channel will span 220m at its narrowest point. The current depth of 12.8m will sink to between 18m and 19m, allowing modern container super-ships to enter the harbour.

The harbour mouth is being widened to the north, which means that a new north breakwater is under construction, and at the same time workers are raising and strengthening the southern breakwater in anticipation of more powerful waves from bigger ships. The project is scheduled for completion in March 2010.

Figures from the City of Durban say that maritime industries contribute an estimated 20% at least to Durban’s GDP. The City accounts for about 55% of KwaZulu-Natal province’s GDP, and with that standing at about 15% of the country’s GDP, it is clear that the port and its related industries are responsible for between 1.5% and 2% of South Africa’s GDP.

Over the last two years, according to Transnet Port Terminals, the port has experienced a drop in volumes handled, but the ports operator is confident that the situation is transitory and that within the next two years volume will once again rise to pre-2007 levels. The port currently handles a massive 1 475 000 container movements, on average, per year.

Transnet’s investment in the Durban port covers a number of other key areas – upgrading the staff car park, resurfacing the quaysides and relocating staff facilities and workshops, increasing container stacking capacity from 13 691 to 17 262 ground slots, and upgrading the seats of the container terminal’s 120 straddle carriers – this is a vehicle used for stacking containers.

A $80-million (R648-million) expansion of the car terminal is also on the cards. Durban’s car terminal handles two thirds of South Africa’s motor vehicle imports and exports. The current allocation of 13 200 bays is to be increased to 14 000, of which 4 500 will be under cover.

With the dip in the country’s economy and the resultant effect on the automotive industry, volumes at the car terminal have declined over the last year but are also predicted to bounce back within two years.

Durban’s port is the busiest on the African continent, and the biggest in terms of container capacity. It serves South Africa’s industrial hub of Gauteng and is well positioned as a point of entry for goods to other countries in the region.

While the port has 6 000 employees on site, about 30 000 others in related services depend directly on it for their income.

Other privately-operated terminals include the Island View oil and petroleum complex which is connected directly to petrol refineries via pipeline, the Rennies bulk terminal, and the massive sugar terminal on Maydon Wharf, one of the largest of its kind in the world.

During the 2008/09 financial year the combined container terminals handled 2 560 366 TEUs. The larger part of this volume came from exports.

As with all South African ports, Durban’s fleet of seven tugs is owned and operated by the Transnet National Ports Authority. All tugs are maintained to the South African Maritime Safety Authority’s class eight standards and are also able to assist with fire-fighting and salvage. During 2008/09 the port of Durban handled a total of 4 554 ships.

Pilotage services, which are compulsory once ships come within three nautical miles of the harbour entrance, are provided through the port’s Agusta eight-seater helicopter, and when the helicopter is not available, the Tsitsikama pilot boat takes over.