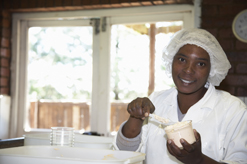 Eunice Madlala at work in the dairy
of Swissland Cheese farm, KwaZulu-Natal
Midlands. It is small- and medium-
sized enterprises such as this that are
benefiting from reforms made to economic
policy in South Africa. (Image: Hannelie
Coetzee, MediaClubSouthAfrica.com.
For more photos, visit the image library.)

South Africa has risen from last year’s ranking of 35 to number 32 on the World Bank’s annual Ease of Doing Business index, which covers the period from June 2007 to June 2008. This is attributed to policy changes that make it easier for new companies to register and start up, as well as a reduction in secondary tax for companies and the removal of regional services council levies.

South Africa is not the top-ranked African country, however – that distinction belongs to Mauritius at number 24 which, says the World Bank, is an inspiration for reform and good practices to other economies across Africa.

Still, South Africa, as the runner-up African country, holds a strong position in view of the fact that 181 countries were studied, though the country has some way to go to regain its position in the top 30. Botswana was third among African countries, while Namibia was fourth.

The Doing Business 2009 report is the sixth in an annual series of World Bank studies investigating regulations that directly enhance or retard business activity in 181 countries. Higher rankings indicate simpler and better regulations for businesses and stronger protections of property rights.

The index tracks, over time, how friendly the regulatory environment is to businesses, especially small and medium-sized enterprises, using 10 indicators for measurement. These involve starting a business, dealing with construction permits, employing workers, registering property, getting credit, protecting investors, paying taxes, trading across borders, enforcing contracts and closing a business.

The World Bank compiles the report together with its sister company, the International Finance Corporation.

Africa performed well as a region, with 28 countries completing 58 reforms, a record for the continent since the initiation of the Doing Business report. The continent also comes in second on the global reforms table, behind the Europe and Central Asia region. The International Finance Corporation’s investment promotion officer David Bridgman said that the most profitable places to invest are countries that are reforming their climates.

While Singapore was the top-ranked country for the third consecutive year, the Democratic Republic of Congo has the dubious honour of coming in last. However, there are four African countries on the list of top 10 reformers – Senegal, Burkina Faso, Botswana and Egypt.

Senegal implemented changes that made it easier to start a business, register property, and trade across borders, while Burkina Faso streamlined the process for paying taxes, dealing with construction permits, and registering property. Botswana was acknowledged for making it quicker to start up a business, as well as facilitating trade.

Egypt facilitated new business start-up, simplified the process of dealing with construction permits and registering property, and introduced procedures that made it quicker to import and export. The country also strengthened protections for minority shareholders, and improved access to credit records for borrowers.

South Africa’s reforms involved amendments to the Corporate Act that directly affect entrepreneurs. Those wishing to start a business no longer have to obtain legal assistance or have their incorporation documents notarised, and in addition these documents may be submitted electronically, a boon for those in outlying areas. Finally, government has eliminated the regional establishment levy and regional services levy, thereby easing the tax burden.

South Africa’s highest rating is in the area of getting credit, where it comes in joint second place with the UK and Hong Kong. However, consumers who have indulged in this ease of obtaining credit have felt the pinch in recent months as interest rates have risen steadily, although the Reserve Bank held the rate steady in August 2008. The country’s next-highest ranking is for protecting investors, where it comes in at joint ninth together with the UK.

The World Bank says that Africa is shaking off its long-held reputation as a high risk region for business, and is becoming more investment-friendly. Investors – mainly Chinese – ploughed $36-billion into Africa in 2007, according to a report published by the Lagos-based Africa Re-insurance Corporation, which adds that this is an indication of the increasingly positive economic climate.